Whitepaper Versus Yellowpaper: What is the Difference? 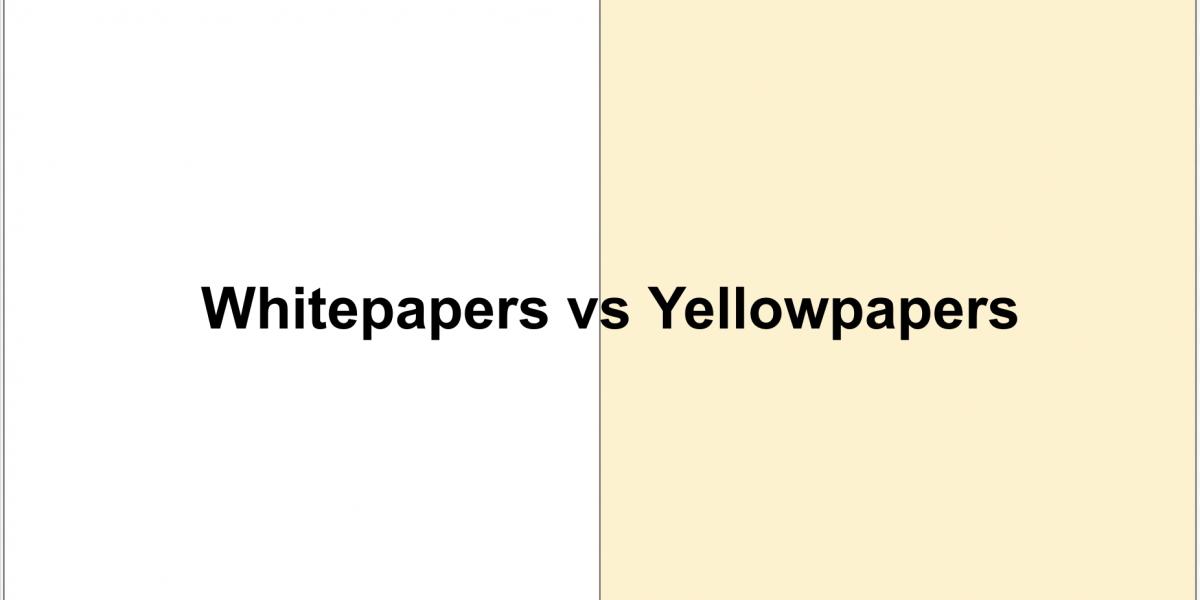 More recently associated with digital currencies and initial coin offerings (ICOs), the “whitepaper” has been around for nearly a century. Now, almost no digital coin or blockchain project appears without one, and investors are urged to study them thoroughly.

Whitepapers are a more familiar term in today’s digital landscape as the vision of a project or company. This stands in contrast to a ‘yellowpaper,’ which is the technical documents of the project. While both are often put under the umbrella term ‘white paper,’ it’s crucial to know the difference if you’re reading them to better understand a project or make an investment decision.

The whitepaper – a vision

The term “whitepaper” originated in British and Canadian governments. The first whitepaper in Britain is cited as Winston Churchill’s of 1922. In Canada, a whitepaper was historically a policy document made available to the general public.

Often defined as an “authoritative report,” a whitepaper informs the public about a complicated issue or presents a philosophy. On a fundamental level, whitepapers are designed to help readers understand an issue, solve a problem, or make a decision. They became prominent in business marketing in the 1990s and are now a common tool to make a business case or convince an investor to buy-in.

The same principles apply to ICOs and other blockchain projects. Since the advent of the ICO, consumers have been increasingly exposed to the concept of the whitepaper. In this context, the whitepaper is a document that incorporates the vision and goal of the ICO, token, or blockchain, and its supporting technology. It also usually includes a pitch in order to encourage investment and outlines the potential return to investors.

Many whitepapers also include a market strategy, a value proposition, diagrams to indicate user and token flows, team and investor information, and a project roadmap.

Often in a whitepaper the technology is already planned rather than being an investigation into possible technological developments.

An example: the Ethereum whitepaper

To take the Ethereum whitepaper as an example, its contents include a history and background, the Ethereum philosophy, the technology and its applications, and the workings of the Ethereum token and mining. As a whitepaper it’s designed to engage both potential investors and those interested in the technology, while not being a strictly technical document.

Its title is “A Next-Generation Smart Contract and Decentralized Application Platform,” which,  despite the title being tech-focused, probably would not distract anyone with some interest in blockchain and Ethereum from reading further.

The yellowpaper –  a technical document

A broad definition of a yellow paper is that it represents research that has not yet been formally accepted; it describes the research or technology that is being investigated.

Often used for academic publications and scientific analysis, the same is now true for blockchain technology.

For ICOs and blockchain businesses, particularly blockchain developers, the yellowpaper is a far more technical document often containing the promise of technology development which has yet to achieve fruition. It is a theoretical or research-based document with potential avenues for technological development rather than the clear planned technology seen in a whitepaper.

A yellowpaper is more likely present an in-depth scientific or mathematical analysis of, for example, a specific blockchain network.

Comparing the to the Ethereum white paper to its yellowpaper as an example, it’s instantly clear that the language and style is different between the two documents.

The title “Ethereum: A secure decentralised generalised transaction ledger, Byzantium version” is more technical; it’s designed to engage a more blockchain savvy user or developer. As a more scientific publication it begins with an abstract, the standard summary for any scientific or research paper.

The Ethereum yellowpaper introduces the technology and provides definitions, but then jumps straight into complex computational equations designed for an expert reader to study.

Yellowpapers are often necessary to develop partnerships between blockchain companies and their development teams, for corporate-level investors, and for blockchain innovators such as those seeking to use open-source blockchain technology for their own applications.

A highly sophisticated potential investor investor may want to review a yellow paper and, depending on the size of an investment, consult an expert to ensure the technology is feasible. The everyday investor, on the other hand, may be reassured that a complex yellowpaper exists and there is transparency behind the technology and structure of a blockchain-based innovation.

When making investment decisions, the white paper can help investors of all levels determine the potential quality of the project. Even without deep technical expertise, learning about the team behind the project and getting a more thorough understanding of the vision can help you make a decision that’s right for you.

A good whitepaper will demonstrate some evidence of viability, and the resolution of a technical problem or use case of a technology application. In contrast a yellow paper should go some way to prove, or demonstrate, a theoretical scientific framework and any related research.