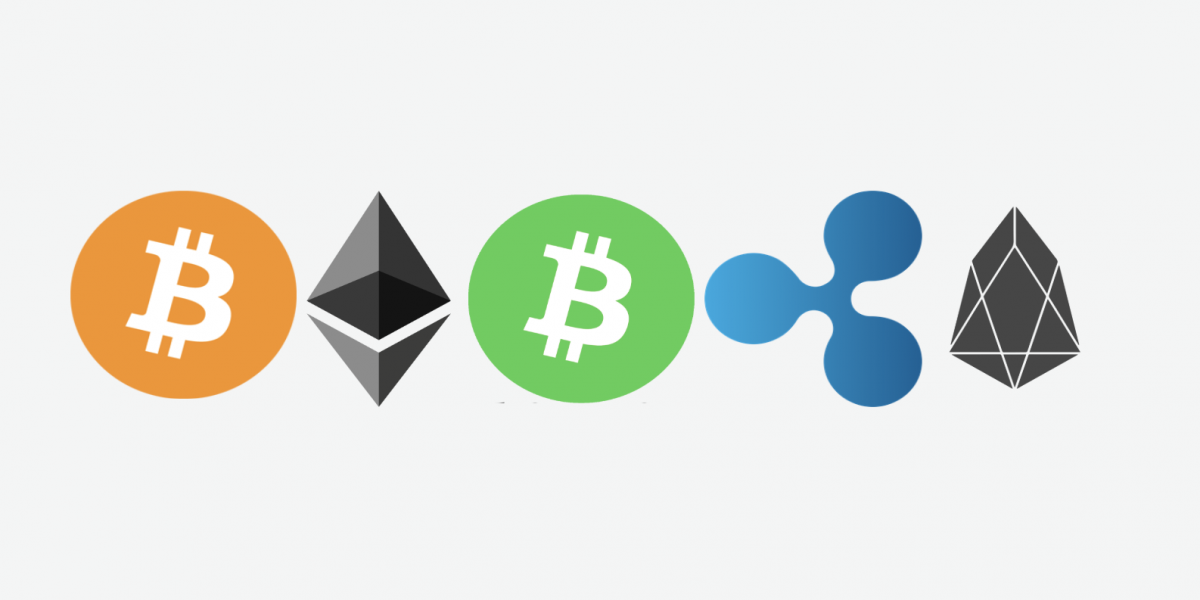 While the digital currency industry’s largest players are prone to change, the market is dominated by names that are familiar to most digital asset advocates.

Understanding the difference between the top five digital currencies in terms of market cap (as of press time) can help develop your understanding of the industry. Further, we’ll cover what makes each currency attractive to its proponents, who its key figures are, and its significant controversies.

Bitcoin as the industry’s driving force

Bitcoin is credited as being the first decentralized digital currency to reach the public. It serves as a new and disruptive way of facilitating payments, eliminating many of the drawbacks that arise when using an intermediary.

The currency was built with a fixed supply in an attempt to allow it to retain value. In this aspect, Bitcoin takes inspiration from gold, and is often praised as a store of value.

All Bitcoin transactions occur on a public ledger, and are easily viewable by the public. Further, internal systems ensure that transactions are legitimate and that double spending is avoided.

In 2008, an unknown figure or group operating under the pseudonym Satoshi Nakomoto released a whitepaper which served as the foundation for Bitcoin .

The following year, the bitcoin network officially launched and the digital currency revolution was born. Nakomoto’s identity has not been revealed, but the figure(s) stepped away from the project.

Since Bitcoin is open source, it is now much larger than its creator(s). The currency’s future is in the hands of the community, as well as its influencers and innovators.

Bitcoin’s largest and most consistent issue is with scaling. Due to the way in which transactions are verified on the network, the growth in popularity of Bitcoin results in higher transaction fees and slower transaction times. However, industry proponents are investigating ways to overcome these hurdles.

Since Bitcoin is energy-intensive, another controversy is with its environmental impact.

Lastly, some industry proponents take issue with Bitcoin’s control over the market, and hope to see the currency have less of an effect on the price of other digital assets.

Ethereum as a platform for innovation

Ethereum is like Bitcoin in many ways, yet aims to serve as more than a payments platform. The Ethereum network serves as the backbone of several of the industry’s most innovative creations, like decentralized applications (DApps) and smart contracts.

Vitalik Buterin is perhaps the most well-known name behind Ethereum, if not the most famous name in the digital currency industry as a whole. The young Russian-Canadian programmer continues to serve as the platform’s figurehead, although since Ethereum is decentralized it is ultimately the community that is in control.

Ethereum’s other co-founders include, but are not limited to, Joseph Lubin and Anthony Diiorio (who are both Canadian).

Similar to Bitcoin, Ethereum faces similar issues in terms of its environmental impact and scaling. This has slightly broader ramifications for Ethereum, as applications running on the network can be slowed down in times of congestion.

This was demonstrated when CryptoKitties, a popular digital collectible platform built on Ethereum, congested the network for a period of time in late 2017

Ripple is a blockchain payments processor that aims to improve global remittance and the way that financial institutions send and receive funds.

Its accompanying digital currency, XRP, has a similar function to Bitcoin in many ways. There is a fixed amount of XRP that will exist, and the currency can be sent from one party to another without the need for a central intermediary.

Ripple Labs is the company that develops the Ripple payment protocol and exchange network. Named one of the industry’s richest people by Forbes, its most influential figure is Brad Garlinghouse.

Garlinghouse serves as Ripple Lab’s CEO, and often vocalizes his thoughts on the industry. Recently, he stated a belief that digital assets like XRP are not true ‘currencies.’

Ripple also gets a lot of media attention due to the altruistic pursuits of its parent company. This year, it donated millions to both DonorsChoose.org and The Ellen DeGeneres Wildlife Fund.

XRP can be polarizing at times, as its advocates and critics often argue about the purpose of digital currencies.

For advocates of the decentralization movement, Ripple cooperating with banks and financial institutions is often seen as a controversial step for the industry.

For others, Ripple working with banks is a sign of positive change, as proponents believe that it is the only way to move the industry forward.

Bitcoin Cash takes its own approach to Satoshi’s ideas

Bitcoin Cash (BCH) is a fork of Bitcoin (BTC), and launched in 2017 as an ideological split of the platform.

Like Bitcoin, Bitcoin Cash serves as a trustless and permissionless payment platform, allowing users to send or receive money without the use of a centralized party. However, the two currencies are separated in many ways from one another.

Bitcoin Cash was created through a Bitcoin ‘hard fork,’ a process in which developers take an existing piece of open-source software (such as the Bitcoin client) and create a new version with their desired changes.

When it launched, Bitcoin Cash inherited Bitcoin’s entire transaction history, but all transactions since then are entirely separate. The currency implemented anti-spam measures, a larger block size, and several other changes that proponents believe will allow the platform to scale better than its predecessor.

The first implementation of the Bitcoin Cash protocol was unveiled by Amaury Séchet at a Bitcoin conference in the Netherlands. Later, other projects released Bitcoin Cash compatible software, and the currency took off from there.

Today, one of the currency’s loudest champions is Roger Ver, the CEO of Bitcoin.com.

Bitcoin Cash is criticized by many of the industry’s prominent figures, including Charlie Lee. Lee is the founder of Litecoin, which is itself a Bitcoin fork, but did not adopt Bitcoin’s title. These critics believe that Bitcoin Cash should not call itself  “Bitcoin” or co-opt its brand.

This is a main area of controversy for Bitcoin Cash. While its proponents call it the ‘true Bitcoin’ and believe that it is more representative of Satoshi Nakamoto’s original vision, others believe it is deceiving investors by intentionally using Bitcoin’s title and status.

EOS is a decentralized platform for blockchain software. In some ways the platform shares similar goals to Ethereum, and calls itself “the most powerful infrastructure for decentralized applications.”

The EOSIO engineering team is led by Dan Larimer, and is the first project of open-source software publisher Block.one.

Its other significant figure is Brendan Blumer, who serves as the CEO and founder of Block.one. Both made Forbes’ list of the wealthiest digital currency holders in early 2018.

EOS currently holds the title of being one of the largest crowdfunded projects in history. It raised over $200 million CAD in the first five days of its Initial Coin Offering (ICO) last year.

According to sources cited by the Financial Times, EOS raised over $4 billion USD (over $5.1 billion CAD) worth of digital currency in its year-long offering,

However, this is an area of some controversy for the project. During a feature on HBO’s Last Week Tonight with John Oliver, the TV personality mentioned that EOS did not have a working model when most of its funds were raised.

Additionally, Oliver mentioned the scandals of EOS figurehead, Brock Pierce, prompting viewers to Google “Brock Pierce scandal.” Pierce since departed the project, and the team removed him from several of the videos on their official YouTube channel.

While these are currently the five largest digital currencies in terms of market cap at the time of writing, the market is undergoing constant change and evolution. Just as the leading currencies were vastly different last year, there is no telling what the future could hold for any of the digital assets on this list.

However, a furthered understanding of the blockchain landscape and its largest players can help contextualize the disruptive and at-times chaotic industry that is continuing to take form.