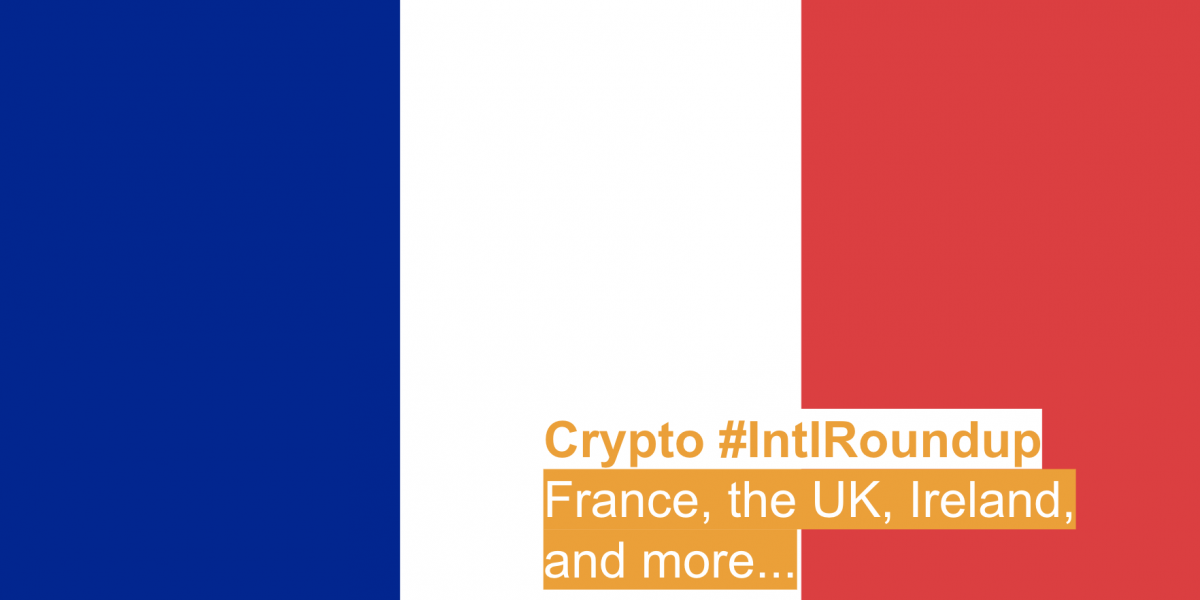 As part of our regular weekly roundup, Coinsquare News covered the week’s significant international cryptocurrency and blockchain headlines. In this edition, we look at the National Assembly in France rejecting proposed changes to crypto tax frameworks, the UK releasing detailed crypto tax advice, and more.

This week, the National Assembly in France rejected some proposed amendments to its cryptocurrency tax frameworks.

According to reports (note: link is in French), several amendments aimed at either modifying conditions or lowering taxes for cryptocurrency investors were rejected. Cryptocurrency proponents believe these changes would have proved favourable for the industry.

Among the proposed amendments that were rejected, one aimed to increase the annual tax exemption for cryptocurrencies from €305 (around $471 CAD) to either €3,000 ($4,600~ CAD) or €5,000 ($7,700~ CAD). Reportedly, this was rejected on the grounds that the Assembly found its current exemption was sufficiently generous in comparison to how securities are taxed in the country.

As of press time, the National Assembly has not made a decision on if it will implement a proposed 30% flat tax for cryptocurrency transactions. If approved, this would lower the current tax rate of 36.2%.

In news out of the UK this week, authorities released detailed tax advice geared towards members of the public that hold or trade cryptocurrencies.

Published yesterday, Cryptoassets For Individuals is the first comprehensive guide to outline the various tax obligations that likely apply to investors in the UK. Alongside an explanation of what utility and security tokens are, the release indicates which taxes apply “in the vast majority of cases.”

It states that most individuals that hold digital assets do so as a personal investment, either for capital appreciation in its value or to make particular purchases. These investors, the report says, will be liable to pay Capital Gains Tax when they sell their crypto assets.

Otherwise, individuals in the UK are liable to pay Income Tax and National Insurance contributions on cryptocurrencies that are sourced from either their employer as a “non-cash payment” or from cryptocurrency mining, transaction confirmation, or airdrops.

According to the Irish Times, the High Court of Ireland made a ruling regarding cryptocurrencies seized in a drug-related case. According to the report, the court ruled that the 2,000 Ether (ETH) held by a convicted individual constitutes the proceeds of crime.

Neil Mannion was previously sentenced to serve more than six years in prison following his conviction. During his conviction, the Irish Criminal Assets Bureau (CAB) confiscated his Bitcoin earnings as criminal proceeds. However, authorities did not claim the 2,000 ETH (worth over $290,000 CAD at press time) that Mannion stored in one of his cryptocurrency wallets at the time.

Mannion said that the State was violating his rights by retaining duplicates of his computer following the conclusion of the case in late 2015, and attempting to confiscate the funds years later. However, in a case reported as breaking “new legal ground,” the judge dismissed his arguments and said that the CAB is not acting unconstitutionally in seizing Mannion’s ETH criminal proceeds.

In a report from Reuters this week, cryptocurrency exchanges in Asia face an uphill battle in attempting to insure themselves.

A previous report from a local Japanese outlet claimed that over $700 million CAD worth of cryptocurrency was stolen in Japan in the first half of 2018 alone. In the wake of these types of breaches in the continent, Asia’s cryptocurrency exchanges are compelled to insure their assets in order to mitigate potential of financial loss.

One of the solutions to counter the prevalence of breaches in Japan was the launch of a self-regulatory agency that was greenlit in October 2018. Composed of more than a dozen licensed digital currency exchanges, this autonomous agency aims to create more oversight and increase user protection.

In terms of insurance, however, Reuters found that this is an area where cryptocurrency exchanges in the region are struggling. In the conversations it conducted, the outlet was purportedly told that the inability for exchanges to find insurance is limiting the willingness for large fund managers to invest.