#IntlRoundup: Venezuela to Use ‘Petro’ at the Border; Australia Trials Blockchain for Folks with Disabilities 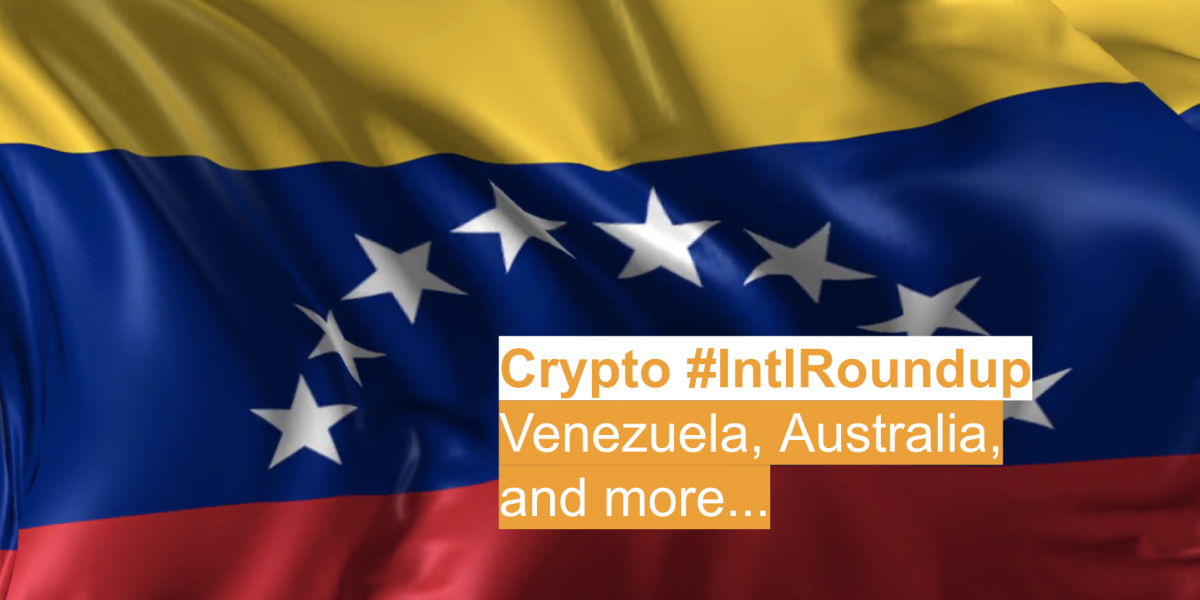 Due to the global nature of cryptocurrencies, keeping up to date with international headlines is a vital way to stay informed about the industry.

As part of our regular weekly roundup, Coinsquare News covered the week’s significant international cryptocurrency and blockchain headlines. This week, we look at Venezuela saying the country will only let passport application fees be paid with their official cryptocurrency, Australia trialing blockchain in the disability sector, and more.

Venezuela to only let passport issuance be paid with Petro

According to Reuters, the government of Venezuela is taking more action to force adoption of their controversial state-backed cryptocurrency known as the ‘Petro.’

As the outlet reported, Venezuelan Vice-President Delcy Rodriguez announced in a press conference (note: link is in Spanish) that the country is employing ‘migration police’ to monitor incoming and outgoing travel to Venezuela.

“The migration police is born to tend to the 72 [ports of entry] that exist at borders, ports and airports,” he said, according to translations.

With this move, the Vice-President also announced that all passport applications and related issuance fees will only be payable through Petro.

The government-backed cryptocurrency is claimed to be tied to the country’s vast oil reserves, and continues to be divisive. Critics within Venezuela’s government previously said that President Nicolás Maduro is not allowed to sell resources that belong to the country. Further, critics within the U.S. government suggested that the move is a ploy to avoid international sanctions.

Australian trials blockchain to create solutions in the finance sector

In a new trial, an Australian entity known as Data61 is exploring the potential for blockchain technology to create ‘smart money’ that could benefit the broader fintech community.

Data61 is an entity created in a merger between CSIRO; an independent Australian federal government agency responsible for scientific research, and NICTA; an ICT Research Centre.

According to an official press release, the trial is being conducted in cooperation with the multinational investment bank The Commonwealth Bank of Australia (CommBank).

Together, the entities say they have developed an application that will serve in a trial to use ’smart money’ through the National Disability Insurance Scheme (NDIS). This will purportedly serve as a case study for future endeavours.

The release states that the country’s scheme to benefit Australians living with disability was chosen for the proof of concept because it involves highly personalized payment conditions. This refers to the fact that NDIS recipients have individualized plans and spending rules.

Ultimately, it hopes to showcase the opportunities that ‘programmable money’ present, with the blockchain-based system for the NDIS serving as a fully-realized example.

“Programmable money represents an opportunity to re-envisage how we think about money and how payments function across the economy,” said CommBank Head of Experimentation and Blockchain, Sophie Gilder. “The potential of this technology for the NDIS is exciting, ranging from greater empowerment for participants, reduced administration costs for businesses and greater visibility for Government.”

According to what is reportedly Vanuatu’s only daily newspaper, the nation will be getting aid from Malta in order to create its own regulatory framework for blockchain technology and Initial Coin Offerings (ICOs).

Located in the South Pacific Ocean, Vanuatu is a nation with a population of nearly 300,000 that is made up of roughly 80 islands.

Malta, on the other hand, is a nation which increasingly finds itself involved in international cryptocurrency and blockchain news. This is due to officials from Malta repeatedly taking action to establish the groundwork to foster the growth of blockchain innovation.

Last week, Maltese Prime Minister Joseph Muscat addressed the general debate of the 73rd Session of the General Assembly of the UN on the topic of blockchain technology. In doing so, he said that cryptocurrencies are the “inevitable future of money.” He also once again referred to Malta as a ‘Blockchain Island.’

Now, Vanuatu will be getting advice from Malta after the Reserve Bank of Vanuatu (RBV) issued a statement that cryptocurrencies are not recognized nor regulated in an official capacity earlier in 2018. The publication that broke the story cited Malta as the only country in the world with a “proper legal framework for Blockchain and Distributed Ledger Technologies (DLT).”