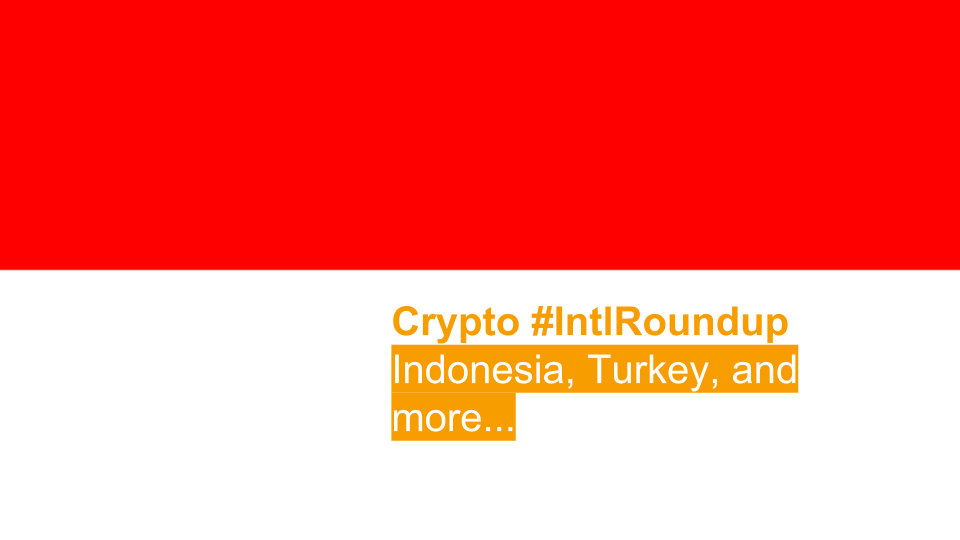 As part of our regular weekly roundup, Coinsquare News covered the week’s significant international cryptocurrency and blockchain headlines. In this edition, we look at critiques of Indonesia’s new rules regarding futures trading, a string of alleged cryptocurrency thieves being arrested in Turkey, and more.

As Reuters reported this week, crypto advocates in Indonesia are criticizing the government’s new rules regarding futures trading. They believe that these new rules are a hindrance to the market’s growth in the country.

Indonesia is famously situated at somewhat of a crossroads when it comes to cryptocurrency regulation. While the country’s central bank banned the use of cryptocurrencies as a payment tool, the government permitted cryptocurrency futures trading last year.

Recently, however, regulators issued new rules that limit the pool of people who are eligible to engage in crypto futures trading. These rules state that a new trader offering future contracts for cryptocurrencies has a minimum paid-up capital of 1 trillion Indonesian rupiah (over $94.1 million CAD as of press time).

According to Turkish media, twenty-four people were detained as part of an operation targeting suspects of cryptocurrency theft.

The news follows a crypto company in Istanbul filing a report that claimed a significant amount of XRP, Ether (ETH), and Bitcoin (BTC) had been stolen. This reportedly led the cybercrime branch of a police department in Istanbul to conclude that 13 million Turkish lira worth of digital assets had been stolen from the two of the company’s accounts.

Police found that the suspects were communicating on PlayerUnknown’s Battlegrounds, an extremely popular online game. This led to a series of simultaneous raids that seized a reported 54,000 lira in cash and 1.3 million lira worth of cryptocurrencies.

On Tuesday, one of the world’s largest banks by assets, Mitsubishi UFJ Financial Group, said it plans to launch a blockchain-based payment network by 2020.

The initiative is the result of a collaboration between Japan’s Mitsubishi UFJ Financial Group (MUFG) and Akamai Technologies, a U.S. financial technology firm. According to a press release, the two organizations have entered an alliance to launch a payment network business.

Reportedly, the aim of this joint venture is to create an open payment network based in Japan that will leverage blockchain technology by the first half of next year.

Over the past few weeks, Coinsquare News covered the Cryptopia breach, which stands as one of the most discussed cryptocurrency exchange breaches in recent times. While determining the actual amount lost in the breach is difficult , some estimates place the losses as high as $11 million USD.

Now, according to local media, the country’s police gave Cryptopia permission to “open again whenever they like.”

“We have finished the main part of the work required by the High Tech Crime Group at Cryptopia’s business premises, although HTCG staff remain there finishing up aspects of their work,” said detective inspector Greg Murton. “Cryptopia management have full access to their facilities and business premises and the Police investigation is not preventing their business from getting up and running again.”

At the time of writing, the exchange remains offline despite being granted permission to operate by local authorities.