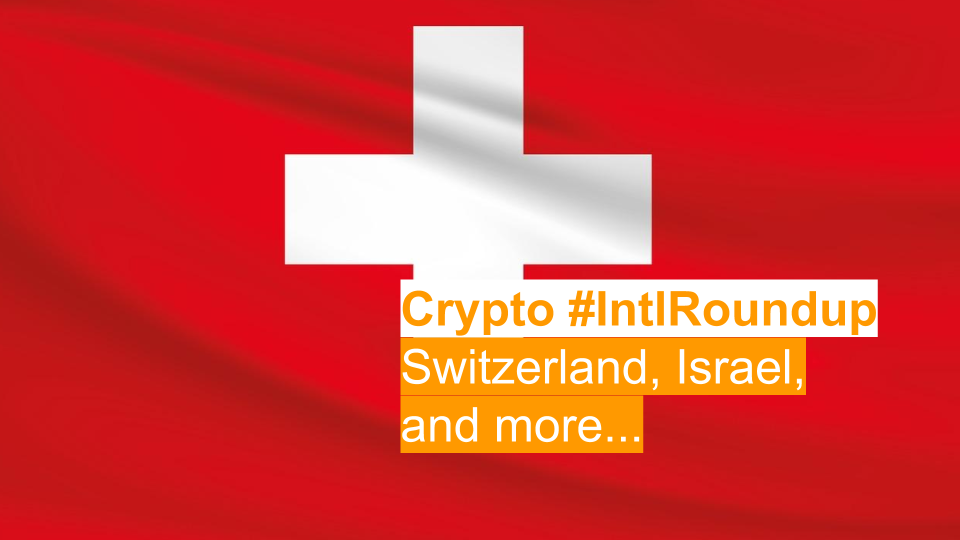 As part of our regular weekly roundup, Coinsquare News covered the week’s significant international cryptocurrency and blockchain headlines. In this edition, we look at actions in Switzerland regarding cryptocurrency regulation, Japan’s clamp down on margin trading, and more.

This week, the Swiss Federal Assembly approved a motion asking the Federal Council to regulate cryptocurrencies. The Swiss Federal Assembly is the body tasked with handling government legislation in Switzerland. If handled correctly, the move could prove to be yet another instance of ingenuity taking place in the country’s burgeoning blockchain scene.

As The Next Web reported, the approval of this motion means that Switzerland’s Federal Council will now be tasked with adopting judicial and administrative provisions that can be applied to cryptocurrencies.

“It should be clarified how the risks could be contained and whether the persons responsible for the cryptocurrency trading platforms should be equated with the financial intermediaries and subject to financial market supervision,” the motion stated, according to a translation.

In news out of Israel, the Tel Aviv District Court ruled in a case where a Bitcoin mining firm had its bank account closed following an alleged policy violation and concerns regarding the risk of money laundering.

According to Israeli local media (note: link is in Hebrew), the court ruled in favour of the Bitcoin mining firm, Israminers. Previously, Israminers had issues with the Union Bank of Israel (Bank Igud), which began blocking deposits that it claimed violated the bank’s policy. Reportedly, this policy prohibited the opening of an account for the purpose of engaging in cryptocurrency-related activities.

After Israminers took legal action against the bank, the judge handling the case ultimately ruled in favour of the mining firm. Judge Limor Bibi determined that Bank Igud’s policy was too broad and ultimately unreasonable, as it did not differentiate between different types of cryptocurrency activity. The ruling clarified that banks do have the right to refuse deposits originating from cryptocurrency trades, but that the mining firm was being treated unfairly in this specific case.

According to the Nikkei Asian Review, authorities in Japan are clamping down on margin trading. The outlet reported this week that officials in the country are expanding the current guidelines that govern the nation’s cryptocurrency trading activities.

This clamp down is the result of recently-approved draft amendments to financial instruments and payment services laws in Japan. Reportedly, these laws cap cryptocurrency margin trading leverage, and mirror standards imposed on foreign exchange trading in the country.

Emirates News Agency (WAM), the official news agency of the United Arab Emirates, recently covered an event that was hosted in order to address the “increasingly complex digital environment.”

The UAE’s financial leaders joined together to host a forum designed to unite industry specialists. The goal was to address industry hurdles and discuss how trends such as digital assets are shaping the global financial services sector.

The event was hosted by UAE Banks Federation, UBF, and Abu Dhabi Global Market (ADGM). Discussed topics ranged from how machine learning can influence financial transaction surveillance, to regulatory approaches for the emerging world of cryptocurrencies.

“We strongly believe in the importance of collaboration to facilitate this transformation and ensure it takes place seamlessly and successfully,” said UAE Banks Federation chairman, AbdulAziz Al-Ghurair. “Given the rapid emergence of new [financial technology] such as cryptocurrencies and other crypto assets, it is essential that we develop frameworks and regulations that govern these technologies and developments.”