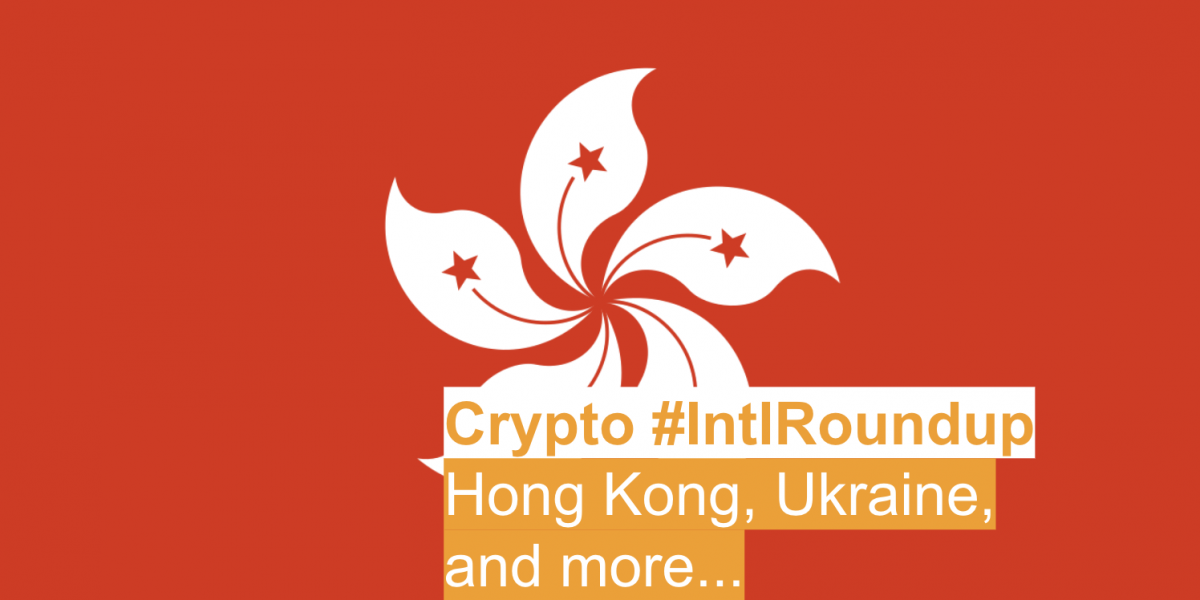 As part of our regular weekly roundup, Coinsquare News covered this week’s significant international cryptocurrency and blockchain headlines. In this edition, we look at crypto regulatory proposals from Hong Kong’s Securities and Futures Commission, Ukraine aiming for cryptocurrency legalization, and more.

This week, reports broke that Hong Kong’s Securities and Futures Commission (SFC) is exploring new rules to guide its cryptocurrency sector. The SFC further proposed a “sandbox” to better develop regulatory practices before introducing them to the wider market.

The news arrives from Reuters, which cited statements made at a fintech conference on Thursday by SFC Chief Executive, Ashley Alder.

Reportedly, per new rules that the SFC is exploring, fund managers than invest more than 10 percent of their portfolio in cryptocurrency assets would need to be licensed. As a result, these funds would have to comply with SFC frameworks, even if they are not operating as ‘securities.’

“The market for virtual assets is still very young and trading rules may not be transparent and fair,” said Alder. “Outages are not uncommon as is market manipulation and abuse. And there are also, I am afraid, outright scandals and frauds.”

As a result of these identified issues, government officials are looking to improve Hong Kong’s oversight of the cryptocurrency industry.

Should the proposal for a sandbox go through, Reuters reported that these frameworks typically afford fintech firms regulatory waivers for a limited period of time. This aims to improve regulatory approaches by first exploring potential actions in a strict sandbox environment.

In a publication by the Ukrainian government, officials outlined plans to introduce a legal framework to support the usage of cryptocurrencies within the country. The release (note: link is in Ukrainian) indicates that the process could take up to three years, but that the move marks the the formal legalization of cryptocurrencies in Ukraine.

As part of the march towards legalization, officials will determine the legal status of cryptocurrencies and exchanges in 2018 and 2019. Then, the government will reportedly outline issues that need to be addressed before moving to formally legalize the industry as a whole.

The government publication cites 2017 findings from the Office of Effective Regulation which indicate that Ukraine was among the top 10 countries by number of cryptocurrency users. Despite this, Ukraine’s Ministry of Economic Development and Trade says there is still legal uncertainty around cryptocurrencies that needs to be addressed.

This uncertainty, it says, includes the legal status of cryptocurrencies, how they are taxed, and how they are used in smart contracts.

In terms of benefits for the government, officials envision increased budget revenues, an inflow of foreign currency to Ukraine, new high-paying jobs, and a developed digital economy.

As part of Edelman’s 2018 Millennials With Money publication, the firm published survey findings investigating how millennials interact with disruptive technology such as cryptocurrencies.

The Edelman research publication calls millennials the largest generation in the United States, noting that this demographic accounts for over a quarter of the country’s population. These new findings follow a previous publication in 2016, as the firm is now investigating the generation’s relationship with money and financial services as millennials are “beginning to approach their 40’s.”

On the topic of cryptocurrencies, the survey found that 25% of “affluent” American millennials use or hold cryptocurrency. Further, it found that 31% are interested in using cryptocurrency, and 74% said technological innovations like blockchain make the global financial system more secure.

Until now, the government of Venezuela considered Petro to have been in a “pre-sale.” Now, it can be purchased with fiat currencies by entities that have registered and passed validation on the official Petro site, and with other cryptocurrencies.

Ultimately, the currency remains highly controversial both in Venezuela and in the broader international community, as nations questioned its legality and called it a ploy to avoid international sanctions. In March, the U.S. banned Petro transactions.