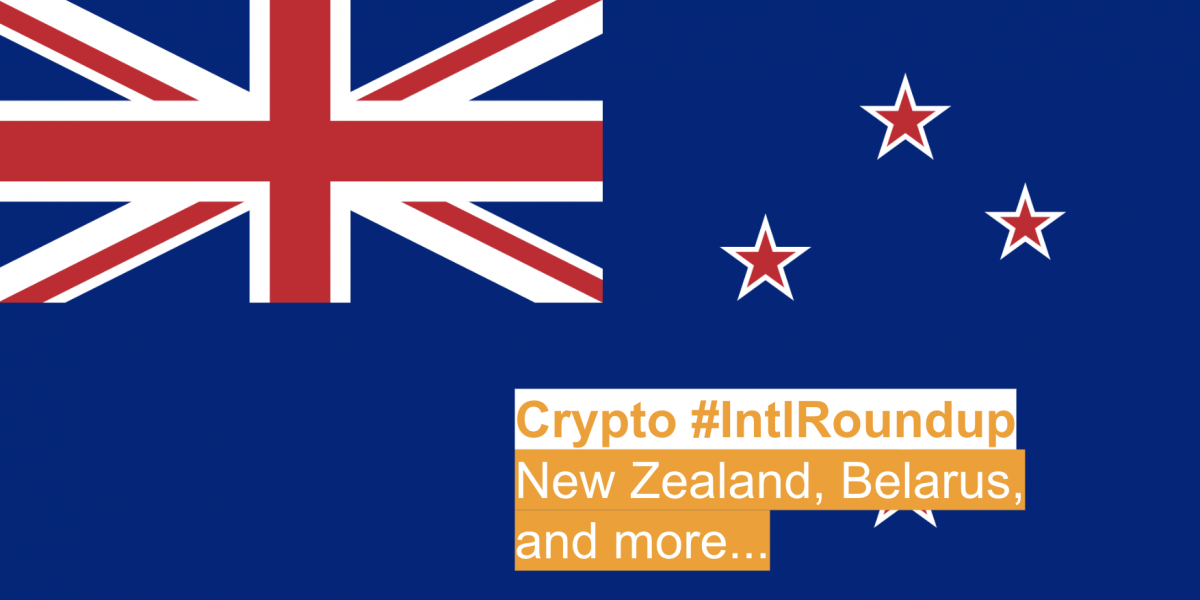 As part of our regular weekly roundup, Coinsquare News covered the week’s significant international cryptocurrency and blockchain headlines. In this edition, we look at Belarus launching what it called a world-first platform involving cryptocurrency trade, police in New Zealand investigating a major crypto breach, and more.

This week, the cryptocurrency industry was rocked by the announcement that a cryptocurrency exchange based in New Zealand fell victim to a breach. Some outlets estimated that total losses could fall somewhere in the $3.5 – $11 million USD range.

On Twitter, officials from the affected exchange, Cryptopia, said the exchange will remain in “maintenance mode” for the time being. Further, they said they were unable to update customers due to the crime becoming a “police matter.

“Police are not yet in a position to say how much cryptocurrency is involved, other than it is a significant amount,” the release stated. “Our focus includes commencing both a forensic digital investigation of the company, and a physical scene examination at the building.”

As the country’s police force takes the steps it says are necessary to handle the investigation, a police presence has been deployed at the exchange’s headquarters. The investigation is enlisting a large team including specialist staff from the force’s High Tech Crime Unit.

Some users on social media doubt the existence of an external breach, and instead said the exchange may have carried out a scam. In the release, the country’s police force said that it is “aware of speculation in the online community” and will “keep an open mind on all possibilities.”

If this is true, not good signs for @Cryptopia_NZ.. potential hack? Or exit scam? Guess we'll find outhttps://t.co/bD3zrTk4XZ pic.twitter.com/achQNfmj2W

Currently, there is no available time frame concerning how long the investigation may take.

A new platform that launched in Belarus this week claims to be the world’s first regulated tokenized securities exchange.

According to Reuters, the new platform went live on Tuesday the 15th. Effectively, it allows users to purchase gold, shares, and other traditional assets using cryptocurrency.

On the app or website, traders are able to purchase stocks in companies or other assets in a way that mirrors using a traditional exchange. Reportedly, it offers 150 types of tokens that correspond to traditional financial instruments. Moving forward, it aims to increase this to as high as 10,000 offerings.

Since the platform was established in compliance with regulators in Belarus, users must undergo a verification process before they can begin engaging with the platform. In the first two hours of its launch, it received 2,000 applications from interested participants.

In news out of Malaysia, it appears that the country’s authorities are regulating cryptocurrency trade and Initial Coin Offerings (ICOs) in the country.

This was detailed in a media release, which followed statements that the country’s finance minister, Lim Guan Eng, made at the beginning of this week.

Offering the sale of cryptocurrencies or engaging in “associated activities” will require authorization from the country’s capital markets regulator, the Securities Commission Malaysia.

Further, a relevant regulatory framework is expected to launch before the end of the first quarter in 2019.

The U.S. Securities and Exchange Commission (SEC) Office of Compliance Inspections and Examinations (OCIE) recently published a report detailing its examination priorities for 2019.

For 2019, it pledges to place a “particular emphasis” on cybersecurity, matters of importance to retail investors, and cryptocurrencies.

While the initial announcement was made available in late December, outlets reported the story over the last few days.

“The digital asset market has grown rapidly and may present risks to retail investors,” the report stated. “Given the significant growth and risks presented in this market, OCIE will continue to monitor the offer and sale, trading, and management of digital assets, and where the products are securities, examine for regulatory compliance.”