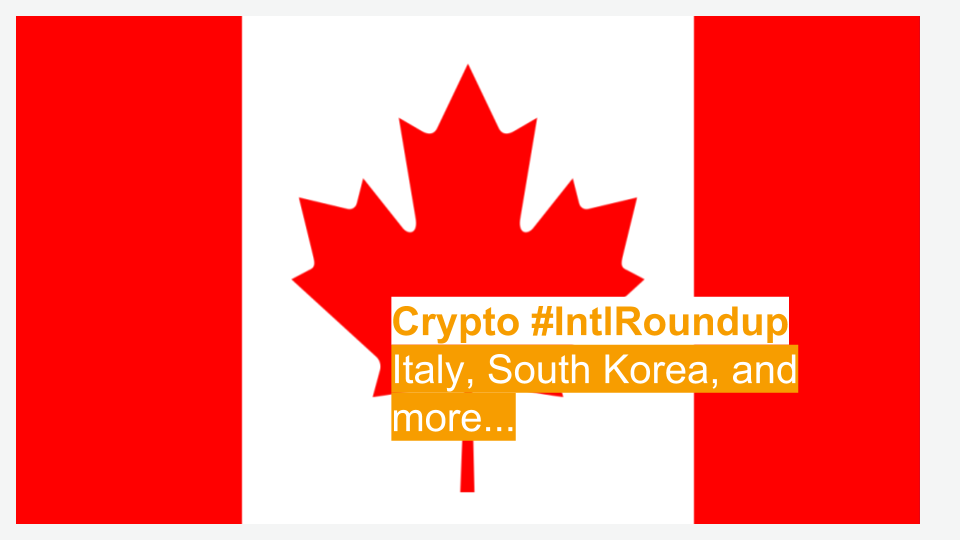 As part of our regular weekly roundup, Coinsquare News covered the week’s significant international cryptocurrency and blockchain headlines. In this edition, we look at a Canadian tech company fighting U.S. regulators, a court in Italy ruling against a defunct crypto exchange, and more.

One international story that developed throughout the week pertains to Canada. A new battle is brewing between the Canadian tech company Kik Interactive and the U.S. Securities and Exchanges Commission (SEC).

The company launched an Initial Coin Offering (ICO) in 2017 for its cryptocurrency, which is known as Kin. Since then, there have been fears that the SEC could decide to classify the launch of this digital asset as a security offering, which would subject it to greater regulatory scrutiny.

As a result, Kik Interactive’s founder and CEO, Ted Livingston, spoke out against the SEC this week. As the Wall Street Journal reported, Livingston is prepared to take the fight to court and said Kin is not an unregistered security, but rather a functional digital currency (in the same fashion as Bitcoin and Ethereum).

In Italy, a court ruled that the former cryptocurrency exchange Bitgrail must repay investors to the tune of millions of dollars. Nearly one year ago, news broke that the Bitgrail lost 17 million units of a cryptocurrency known as NANO. Total losses were estimated at around $170 million USD at the time.

The Bit Grail Victims Group (BVAG) posted about the new ruling earlier this week, calling it a “win for cryptocurrency exchange users.”

Reportedly, an Italian Bankruptcy Court worked with a court-appointed technical expert to determine that the exchange’s owner and operator, Francesco Firano, was at fault for the losses. As a result, the BVAG says that authorities have already seized over $1 million USD in assets from Firano. Additionally, the group claims that millions of dollars worth of digital assets have been seized from the exchange’s accounts and moved to ones managed by court-appointed trustees.

According to local media in South Korea, four of the country’s major cryptocurrencies are entering a united front to fight money laundering. The four exchanges in question are Bithumb, Upbit, Corbit, and Coinone.

Their collaborative effort against money laundering involved the establishment of a hotline where information on unusual trading and transactions can be shared between exchanges in real-time.

The report cited an official as having said that the collaboration will allow exchanges to act in unity in addressing wrongful transactions. This will seemingly present more opportunities for exchanges to take “necessary measures” against illicit crypto activity.

Two weeks ago, Coinsquare News covered statements from police in New Zealand regarding a major cryptocurrency breach that occured in the country. The exchange in question was Cryptopia, and it suffered losses estimated in the $3.5 – $11 million USD range.

Since then, some reports emerged claiming that the breach is still ongoing.

Today, however, the country’s authorities came forward to say that this is not the case. Police are disputing claims that a further $180,000~ USD worth of cryptocurrency was since stolen from the exchange.

“We’re looking into that claim but on the face of it we’re pretty satisfied that it’s not correct,” said Canterbury police Detective Inspector, Greg Murton.

A Switzerland-based smart wallet manufacturer known as Tangem is in the news this week following a press release. The release says that Tangem it is producing physical banknotes for the Marshall Islands’ digital currency.

Purportedly, the move is part of a plan to launch a cryptocurrency known as the ”sovereign” (SOV) as an official legal tender alongside the U.S. dollar.

Creating physical notes aims to make sure that all citizens of the island country will have access to the national cryptocurrency, even if they do not have an internet connection.