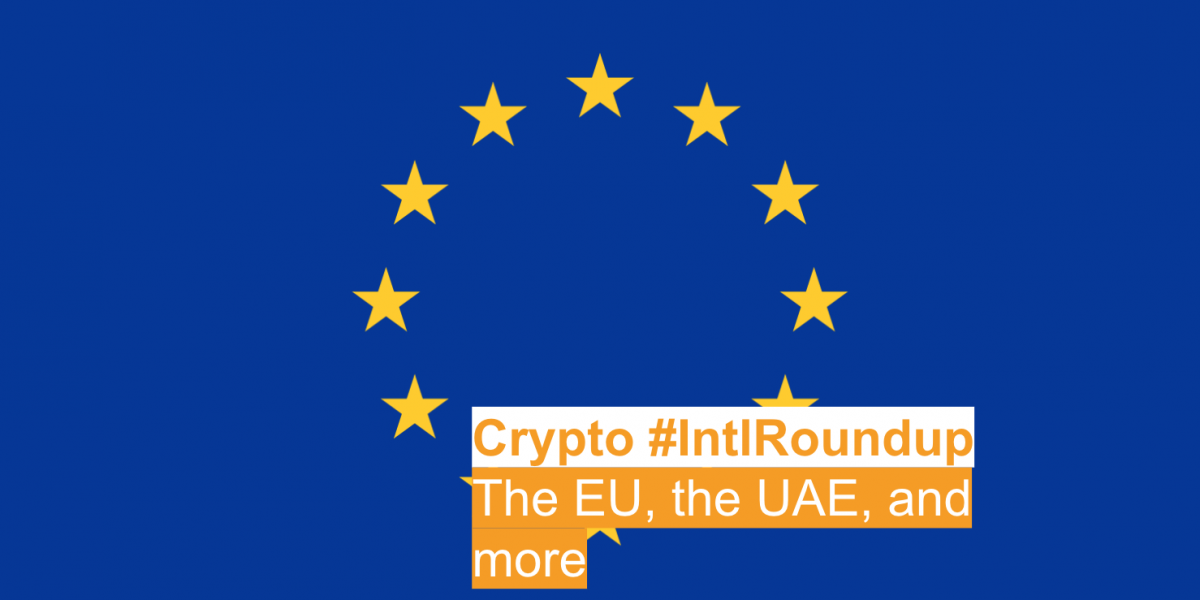 As part of our regular weekly roundup, Coinsquare News covered this week’s significant international cryptocurrency and blockchain headlines. In this edition, we look at EU members signing a declaration to promote blockchain adoption, a U.S. Rep introducing federal regulation, and more.

According to the Financial Times, a collaborative effort between southern members of the European Union will promote the adoption of blockchain and adjacent technologies.

A declaration was signed by seven EU member nations referred to as the “Mediterranean seven.” It includes Portugal, Spain, Cyprus, Greece, Italy, France, and Malta. The declaration aims to promote the benefits of blockchain technology, which governments say far exceed their use as merely a platform for cryptocurrency transactions.

In fact, the declaration says blockchain technology can be a “game changer” for fields as diverse as education, transport, mobility, shipping, land registration, customs, healthcare, and more.

@MaltaGov leads 6 other EU Member States to sign a joint declaration on cooperation on #blockchain technology. Proud to see the smallest nation in the EU taking a leading role. Thank you #France #Spain #Italy #Portugal #Greece & #Cyprus for your support.@MaltainEU #ourfuture -SS pic.twitter.com/poyETgZwCw

According to a junior minister in Malta, the small European nation was the one to lead the other participating countries in the cooperative effort.

Malta has made a name for itself recently in the emerging technology space due to the pro-blockchain stance of its Prime Minister, as well as the nation’s efforts to become a “blockchain island” through innovative regulation.

According to a local news outlet in the state of Ohio, a U.S. Representative is planning to introduce federal regulation that focuses on digital assets. Its aim is to provide clear regulatory frameworks for the Initial Coin Offering (ICO) and cryptocurrency industry.

The announcement was made by Warren Earl Davidson, a member of the United States House of Representatives from Ohio’s 8th congressional district.

As the outlet reported, Davidson’s legislation would place cryptocurrencies in their own asset class. The goal is to reduce the impact of the often unclear delineation between securities and ‘utility tokens.’

Davidson reportedly believes this will also allow the U.S. federal government to be more effective when it comes to regulating the cryptocurrency industry, while also benefiting the industry as a whole.

In news out of the United Arab Emirates, an international financial free zone says that it completed a trial using blockchain technology for the purpose of facilitating electronic Know-Your-Customer (KYC).

Abu Dhabi Global Market (ADGM) published a press release which announced the “successful conclusion” of the first phase of its blockchain-focused experiment.

The project launched in March of this year, hoping to test operational and technological models that could support an electronic KYC utility.

“By harnessing the power of technologies such as blockchain, the e-KYC project has demonstrated tangible benefits,” the release stated. “In addition to enhancing KYC checks across the industry, the utility can achieve significant cost efficiencies and financial inclusion driven by unified KYC standards.”

Fulfilling KYC obligations is a major regulatory obligation for cryptocurrency exchanges and other financial institutions. One of the readily-praised potential uses for blockchain technology is its ability to make KYC processes more effective.

In a release from the Swiss Financial Market Supervisory Authority (FINMA), the country’s financial regulator is offering a ‘FinTech license’ that extends its coverage to blockchain and cryptocurrency-focused companies.

The official release says that the license has “relaxed requirements.” It allows institutions to accept money from the public of up to 100 million Swiss Franc (over $134.6 million CAD) on the condition that these funds are ‘not invested’ and receive no interest.

Additionally, any institution with this licence must conduct its business activities in Switzerland and hold a registered office in the country.

Blockchain innovation continues to be a talking point in Switzerland, where the country’s principal stock exchange expects its blockchain-focused exchange to surpass its current trading platform in the next 10 years. As for this “relaxed license,” interested parties will be able to apply from 2019.