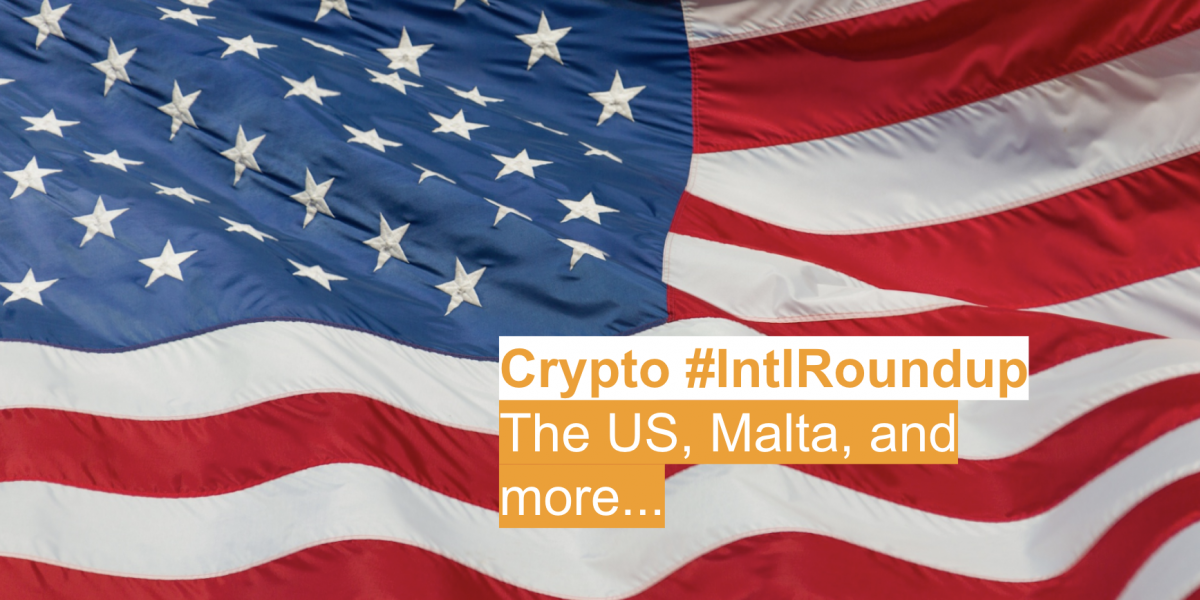 Due to the global nature of cryptocurrencies, keeping up to date with international headlines is a great way to stay informed about the industry.

As part of our regular weekly roundup, Coinsquare News covered the week’s significant international cryptocurrency and blockchain headlines. This week, we look at massive news regarding the relationship between crypto and the CFTC in the U.S., as well as Malta and Israel engaging with blockchain technology in ways that could prove significant for global adoption.

In an interview with CNBC’s Fast Money, Commodity Futures Trading Commission (CFTC) Chairman Christopher Giancarlo expressed his beliefs about the future of cryptocurrencies.

#Bitcoin is a commodity, but how do you characterize the rest? @giancarloCFTC, the man in charge of #crypto regulation, goes on the record. pic.twitter.com/hn2B1UOnGH

“I personally think that cryptocurrencies are here to stay,” he said. “I think there is a future for them. I’m not sure they ever come to rival the dollar or other hard currencies, but there’s a whole section of the world that really is hungry for functioning currencies that they can’t find in their local currencies.”

Giancarlo added that some countries have currencies that are “not worth the polymer or the paper they’re written on,” noting that in those countries cryptocurrencies are becoming a useful tool. This is already the case in Venezuela, where the severe inflation of the Venezuelan bolívar is causing many to use cryptocurrencies in their everyday lives.

As the U.S. Commodity Futures Trading Commission (CFTC)  announced this week, a federal court found that ‘virtual currencies’ are commodities.

The District Court for the District of Massachusetts entered an order holding that the Commodity Futures Trading Commission can prosecute fraud involving virtual currency, finding that virtual currencies are commodities and therefore fall under the CFTC’s purview.

“This is an important ruling that confirms the authority of the CFTC to investigate and combat fraud in the virtual currency markets,” said CFTC Director of Enforcement James McDonald. “[The] CFTC has the power to prosecute fraud with respect to commodities including virtual currencies. We will continue to police these markets in close coordination with our sister agencies.”

However, the ruling does not necessarily speak to all cryptocurrencies, as regulatory frameworks are still growing to adequately consider the arrival of the nascent industry. In this particular instance, the court’s findings will allow the CFTC to govern a cryptocurrency known as My Big Coin (MBC).

It is ultimately unclear how this will affect other cryptocurrencies in the U.S. moving forward. However, some advocates praise the decision as they disagree with the Securities and Exchange Commission considering some cryptocurrencies as securities.

As Forbes reported, former U.S. President Bill Clinton spoke on blockchain technology in the context of the global regulatory landscape in an event hosted by Ripple this week.

As the keynote speaker of Ripple’s annual conference ‘Swell,’ an event designed to connect policy leaders and financial technology experts, Clinton provided insight into the relationship between regulation and innovation.

Notably, he said that “you can’t apply an old regulatory regime to a new technology,” urging regulators to properly consider blockchain technology in order to avoid “killing the goose that laid the golden egg.”

“This whole blockchain deal has the potential it does only because it is applicable across national borders, income groups,” he said, during the event. “The permutations and possibilities are staggeringly great. But we could ruin it all by negative identity politics and economic and social policy.”

While stances on both cryptocurrencies and their underlying technology are split internationally, in Canada many regulators have come forward to express that they do not intend on halting innovative blockchain endeavours.

The Ontario Securities Commission (OSC) said earlier this year that it aims to create regulation that will not stifle genuine growth in the industry. Additionally, the regulator was involved in several actions this year that could help govern the industry’s future.

Further, the University of Malta partnered with the Malta Information Technology Agency (MITA) to launch a €300,000 (around $455,000 CAD at the time) scholarship fund for blockchain and distributed ledger technology.

Now, the island country is in headlines once again for its blockchain innovation. Malta’s Prime Minister, Joseph Muscat, recently addressed the general debate of the 73rd Session of the General Assembly of the UN in a speech that heavily praised cryptocurrencies and their underlying technology.

“Blockchain makes cryptocurrencies the inevitable future of money [and is] more transparent since it helps filter good businesses from bad businesses,” he said.

Muscat continued by saying that distributed ledger technologies (DLT) can have a significant impact on various industries. For example, he mentioned that DLT can ensure that humanitarian assistance reaches its intended target. Further, the technology could even improve electronic medical record keeping.

In the speech, Muscat said that Malta is launching itself as a ‘Blockchain Island,’ continuing similar rhetoric from earlier this year.

As Israeli newspaper The Times of Israel reported this week, the national securities regulator of Israel begun using blockchain technology in order to improve its cybersecurity practices.

The Israel Securities Authorities (ISA) is the regulator tasked with ensuring the transparency and fairness of Israel’s capital market. This week, the ISA announced that it is implementing blockchain technology in the system it uses to communicate with bodies in its jurisdiction.

According to statements reported by The Times of Israel, the ISA believes that leveraging blockchain technology will help ensure the credibility of relayed information.

“The technology verifies the messages’ authenticity, prevents fraud, and prevents them from being edited or deleted,” it added. “Additionally, the system prevents the option of denying that a message was received from the ISA.”

Reportedly, the ISA plans to use blockchain technology in two additional systems in the future. This inclusion is set to take two forms: an online voting system that allows investors to participate in meetings remotely and a system used to record reports from bodies that the ISA supervises.