The U.S Patent and Trademark Office (USPTO) released a patent application by TD Bank for a system which could facilitate real-time retail transactions made with digital currencies.

The patent was just released now, despite being originally filed on September 28th, 2016. In it,TD Bank proposes a “Real time virtual draft system and method”. The patent outlines the issue faced by retailers needing to wait for a blockchain transaction to be processed and confirmed to ensure the purchaser has funds, and is not double spending.

Verifying available funds for a transaction

Real-time digital currency transactions are currently a major challenge for the industry due, in part, to the length of time it takes to verify a transaction on a blockchain.

TD Bank proposed a solution to the problem of waiting for a distributed ledger (blockchain) transaction to be verified by proposing that a transaction be authorized in real time if the system can verify that the purchaser holds sufficient funds. This would remove the mining process as the sole way to verify transactions on the blockchain network.

“The seller may wait until six blocks containing the transaction are published, which can take more than an hour in some cases,” detailed the patent. “Such delays can impede the widespread use of digital currency in settings and transactions where immediate delivery of goods or services is expected upon tender of payment.”

A “central authority” would determine a purchaser holds sufficient funds for a transaction in one or more of the purchaser’s accounts. In the terms of the patent, the central authority could be a “financial institution and/or other clearing house.”

“If the central authority determines that the assets in the one or more accounts have a total value equal to or greater than the value of the digital assets to be transferred, the central authority provides authorization to complete the [transaction] without waiting for a confirmation from the distributed ledger regarding the transfer.”

The patent details a number of scenarios and embodiments for the proposed system including its application to retailer operated point of sale (POS) terminals. The system would also provide a framework of recourse for merchants and customers in the event of a disputed transaction.

As with most patents, there is no specific information provided about TD Bank’s plans to pursue the development or implementation of this system.

TD Bank is rumoured to be investing heavily in the development of blockchain technologies for their banking systems.

An analysis of published and pending patent applications relating to digital currencies, blockchain, and distributed ledger technologies reported by Envison IP in January, 2018, focused on patents held by major banks and financial institutions.

According to the report TD Bank is 7th with 11 blockchain related patents. 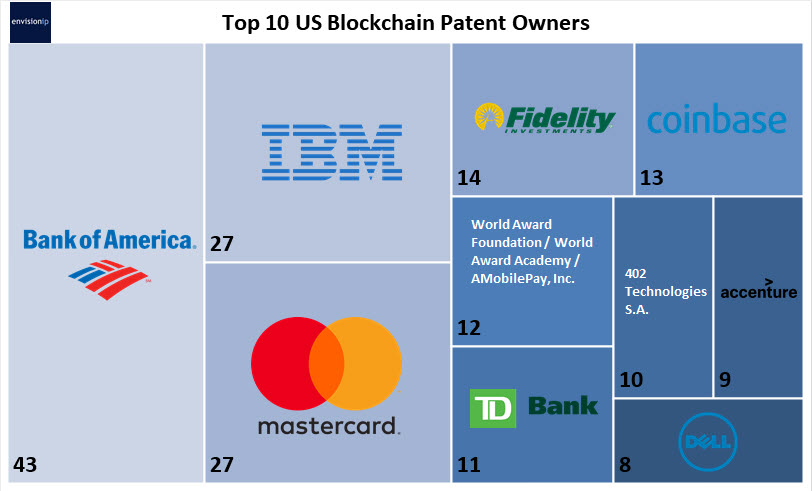 In October 2017, TD Bank allocated $3.25 million CAD from its fintech investment pool to provide patent application funding and support for new ventures in Canada and elsewhere. Under the program participating startups retain the right to their technology, but in return for funding TD Bank gain a non-exclusive license to the patents.

“TD is building the bank of the future, and strong relationships with leading technology and fintech companies provide us with enormous insights while fueling our own creativity and innovation,” said Colleen Johnston, Group Head, Direct Channels, Technology, Marketing and Corporate & Public Affairs, TD Bank Group. “Ultimately, the customer wins when banks and fintechs collaborate.”

Behind the scenes, many large banks and financial institutions are working on implementing blockchain technologies to improve their infrastructure. These technologies include systems to facilitate transactions, securely manage data, verify identification, and perform and manage credit scoring.

Given these patent applications and pushes for innovation, 2018 is likely to see frequent testing and possible implementation of new blockchain based systems alongside traditional financial infrastructures.