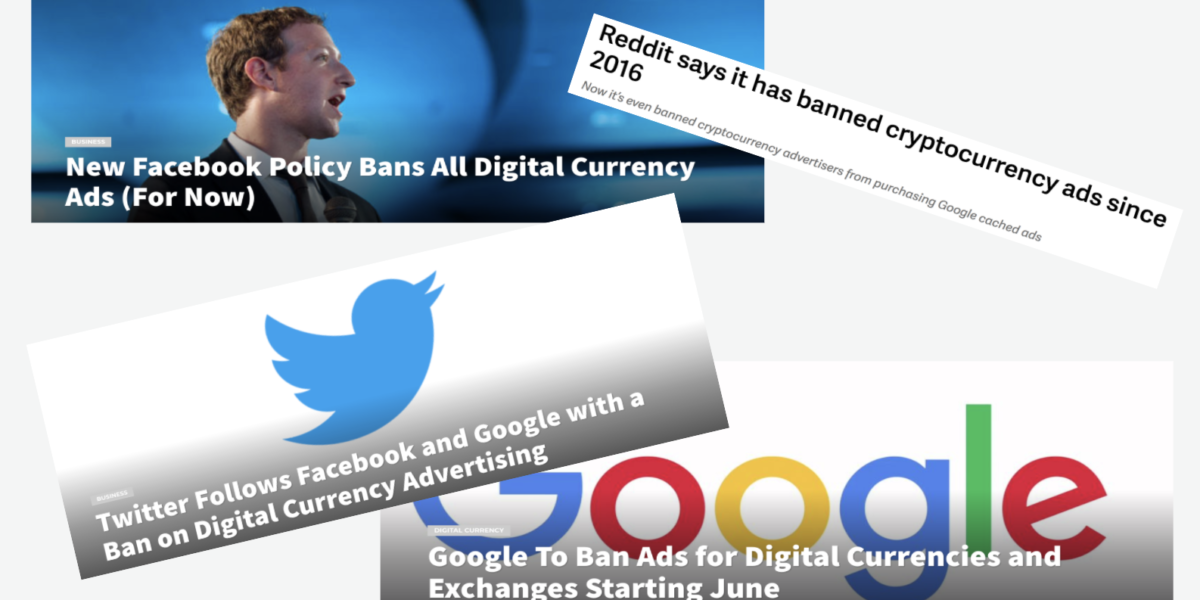 Digital currencies are in an interesting transition period. While the public was once almost entirely unaware of the industry, they  have since been bombarded with ads for various digital currency projects across social media. However, often the advertisements that are presented to the public are not necessarily indicative of the industry’s true value.

To understand the decision of online ad networks banning digital currency advertisements, it’s important to consider the industry’s current landscape. With the popularity of digital currencies, the industry saw an emergence of bad actors looking to take advantage of investors.

Earlier in 2018, Canada’s Better Business Bureau called scams related to the digital currency industry one of the year’s most prevalent financial threats to Canadians. “Cryptocurrency scams” placed 5th in the Bureau’s top 10 list of financial threats. This was the industry’s first ever inclusion on the list, due in large part to the prevalence of fraudulent Initial Coin Offerings (ICOs).

Fraudulent ICOs attempt to blend in with genuine ICOs and honest digital currency projects, hoping to use positive press surrounding the digital currency industry as a means of deceiving investors.

One example is BitConnect.

During its heydey, BitConnect ads were plentiful online, promising incredible returns to investors that participated in its lending platform. However, BitConnect since shut down amidst cease-and-desist orders and allegations that the platform was running a Ponzi scheme.

BitConnect is an example of a project using the digital currency industry’s success as a way of promising investors undeliverable returns, allowing its mysterious creators to make a profit. When Facebook banned digital currency ads in January 2018, the team made reference to these types of ads, giving examples like: “New ICO! Buy tokens at 15% discount now.”

In addition to the prevalence of these deceptive ads online, it is possible that various companies were under both regulatory and social pressure to take action. Following Facebook’s ad policy update, Canadian regulators praised the company’s decision and suggested Google follow suit.

Google later proceeded to announce that it would ban digital currency ads from June 2018, and Twitter announced its intent to do the same.

The short term: are bad actors hurting the industry’s reputation?

In banning digital currency ads, these networks could effectively be preventing genuine actors from marketing themselves and their projects to the public.

Further, many raise issue with the way that platforms like Twitter, Facebook, and Google handled their ban announcements. Digital currency enthusiasts argue that these platforms did not make an appropriate effort to acknowledge the existence of honest digital currency projects.

For an average investor or member of the public, headlines announcing a “ban” on digital currency ads could negatively influence their view of the entire industry. As a result, this could harm the prospects for success of genuine actors attempting to create projects with potential for social good.

Currently, a soon-to-be-filled lawsuit by the Russian Association of Cryptocurrency and Blockchain (RACIB) alleges that the actions of these social platforms harmed the value of digital currencies, going as far as to call it a leading factor in the recent price dip.

“We believe that this is the use of the monopoly position of the four companies [Twitter, Facebook, Yandex, and Google] that entered into a cartel with each other to manipulate the market,” said the RACIB. “The ban on these four organizations led to a significant drop in the market in recent months,”

Despite the bad press, not everyone in the digital currency industry agrees that the removal of ads from social media networks is harmful for the industry. Removing deceptive actors from the space is a sentiment often echoed throughout the community, as fraudulent projects can create a negative stigma around the industry as a whole.

Proponents argue that genuine projects operating in the space often do not need to advertise, as many digital currencies are decentralized and developed through communal efforts.

Further, with less exposure to the array of fraudulent ads online, the public could advance its education on the digital currency industry without being scared off by reports of scams and investors scorned by bad actors.

Accross Reddit, communities with hundreds of thousands of members discuss digital currencies of their own volition, and are quick to call out platforms that they believe to be fraudulent. Many genuine digital currency projects have their largest followings on Reddit, and use the platform to engage with the community.

Further, while Twitter banned digital currency ads following decisions from platforms like Facebook and Google, Twitter’s CEO, Jack Dorsey, remains a significant proponent for the industry. In fact, Dorsey recently told The Times of London his personal belief that Bitcoin could become the sole global currency in 10 years, and invested in Lightning Labs.

Ultimately while headlines regarding “cryptocurrency ad bans” could be damaging to the industry in its current state, fraudulent projects fading into obscurity could strengthen the industry in the long-term. Further, despite platforms banning digital currency ads, strong communities continue to prevail online and discuss impactful projects on the horizon.