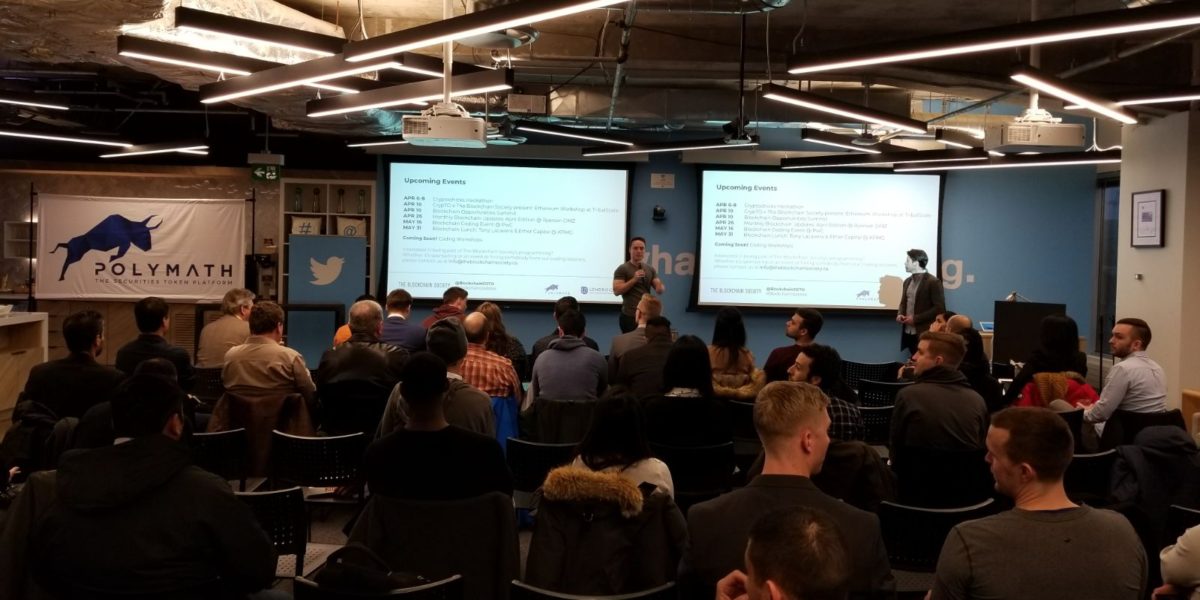 Recently, The Entrepreneurship Society (TES) organized a lively event at Twitter Canada’s headquarters in Toronto to demonstrate several practical use-cases for blockchain platforms. The event drew a slew of interest from the blockchain community and gave sharp insight into available opportunities in blockchain for the future if present challenges are adequately addressed.

Graeme Moore, vice president of marketing at Polymath, kicked off his talk with a joke that outlined some of the ridiculously haphazard approaches to investment in ICOs that are fueled by fear of missing out.

Moore went on to describe the nature of some ICOs as we know them to be “crazy ideas that sometimes don’t make any sense.”

Where Polymath fits in is that it exists to bring regulation, clarity, and sensibility when it comes to issuing security tokens. Although the majority of ICOs have been issued as utility tokens, Moore believes that security tokens are poised for an explosion in growth; furthermore, he believes that all securities will be tokenized in the future.

my uncle 4 months ago: wats a bitcoins?

my uncle yesterday: I’ve partnered with an awesome VC firm for a block chain based Nutella bread dispenser. i can get u in for 10k. Trust me you don’t want to miss this.

The key advantages of tokenizing securities that Moore stressed includes their ability be traded at anytime and avoid complicated manual processes via smart contracts. He also believes that there would also be lower fees for trading and potential access for two billion people without bank accounts.

Securitizing ICOs, though, requires overcoming hurdles, such as how their anonymous nature lends itself to nefarious activities such as money laundering and terrorist financing. Polymath solves these issues by restricting secondary market trading to authorized participants who have been vetted by know-your-customer (KYC) processes similar to the processes that banks follow.

There is still the matter of there being a standardized token that securities ICOs can be built on. Just as the adoption of ERC-20 standards led to the proliferation of ICOs throughout 2017, Polymath is hoping that its own ST-20 standards will do the same for security tokens. Whether this occurs or not, however, remains to be seen.

Supriya Vasu of Lendroid opened her demo by telling a personal anecdote about a friend who lost bitcoins in the Mt. Gox breach that could have been valued at about $40,000 USD (nearly $51,000 CAD). There have been 16 major breaches of centralized exchanges over the last four years that have cost nearly $33 billion USD (nearly $42 billion CAD). Vasu pointed to this as mounting evidence for decentralized exchanges in order to spur buyer confidence.

This paves the way for decentralized lending, margin trading, and short selling.

Vasu explained that complaints about current decentralized exchanges are that they are slow and not user friendly. Lendroid’s solution involves a shared lending pool where lenders and traders pay for the services provided by Relayers and Wranglers.

Iliana Oris Valiente, the founder of ColliderX, framed her discussion on the notion of problem-solving and said that,“the problem that we set out to solve with ColliderX is ‘How do you continue to promote core foundational research as there is an ever-increasing set of expectations from the business community about what this magical thing called “Blockchain Tech” can do for their organizations?’”

ColliderX aims to harness the potential of universities and educational institutions in their capacity to perform blockchain research. This could help ColliderX become a critical research and development hub that attains the objectives of the blockchain community.

ColliderX is an open-source and non-profit; financial backers are compensated with voting rights for the direction of research. By will creating an open repository of problem statements, ColliderX hopes to consolidate the foundations of blockchain and allow for solutions for industry-wide problems that may be holding back progress.

Chinmay Patel, CEO and founder of BlockX Labs presided over a presentation regarding the high failure rate of ICOs. According to data analyzed by Patel, roughly 60 percent of ICOs have failed or will fail in the next six months.

“There is no accountability,” said Patel. “Once you raise funds, nothing stops an entrepreneur to go out and literally run away to a corner of the world and live the rest of their life happy.”

Patel touted Decentralized Autonomous ICOs (DAICOs) as more viable replacement for ICOs. Funding would be structured over months and unlocked based on results, with investors having the ability to recoup some of their money at different stages.

Under Patel’s model, a company would have to develop a project, deploy it and gain user feedback. If further funding is needed, a growth proposal can be voted on by investors.

While statistics show us that the majority of start-ups are always likely to fail within three years regardless, the accountability of DAICOs would eliminate many common reasons that ICOs fail.

While there is a great deal of both investment and interest in blockchain, current hurdles regarding decentralization, regulation and research need to be addressed for sustainable success to occur. The TES presenters gave us a window into how different innovations may reshape blockchain’s direction. Other players, however, who see the same opportunities will also be adept in proposing their own solutions.

Overall, The Entrepreneurship Society will continue to fulfill the pressing need for education, dialog and networking among leading minds within the blockchain community. The next event, “Learning Breakfast: Selling Your Vision,” occurs on April 3rd at RSM Canada. A full list of future TES events and descriptions is available here.