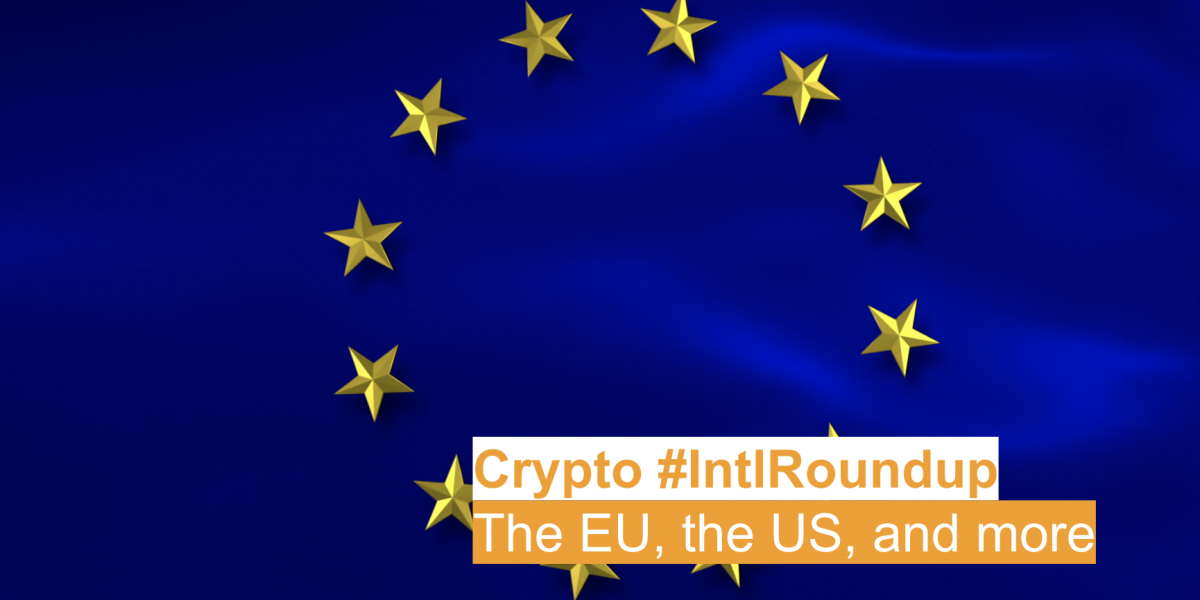 The global nature of digital currencies makes following international news beneficial for investors and interested market participants. However, due to how fast news travels through the landscape, it can be easy to miss the occasional story every once in a while.

As part of a regular weekly roundup, Coinsquare News compiled the week’s significant international headlines. In this edition, we look at EU regulators revisiting the topic of cryptocurrencies, a U.S. study regarding cryptocurrency ownership among students, and more.

EU regulators are revisiting the topic of cryptocurrencies

As Bloomberg reported this week, cryptocurrencies are once again a topic of discussion for politicians in the European Union.

According to a document cited by Bloomberg, the EU’s 28 member states are set to have another discussion regarding the challenges created by the emergence of the cryptocurrency industry.

Reportedly, issues such as the potential for cryptocurrencies to be used for tax evasion and illicit activity will be discussed, and regulators will explore whether or not existing rules should be made more strict in order to combat these fears.

Previously, a report published in July by a branch of the European Union found that regulators should treat cryptocurrencies like any other financial instrument. It suggested that policy makers should take action proportional to market importance, complexity, and associated risks.

This news comes after Coinsquare announced their expansion plans into the EU, set for Q4 2018.

Forbes reported this week that a survey launched by Coinbase investigated the digital asset habits of students in the United States.

The survey was carried out by Qriously, a research company based in London. It was conducted on a nationwide-basis and surveyed a total of 675 U.S. students.

India’s central bank worries about the effects of its crackdown

On Thursday, Quartz reported that India’s central bank is worried about an inability to observe cryptocurrency transactions, with traders moving to conduct transactions outside of their scope as a result of the country’s actions against cryptocurrency businesses.

Previously, the Reserve Bank of India (RBI) ordered banks to discontinue their relationships with digital currency exchanges, leaving the country’s exchanges in a difficult situation.

In its annual report published this week, the RBI emphasized the need to keep cryptocurrency transactions transparent to avoid an increased risk of terrorism financing and money laundering.

However, as Quartz pointed out, the country’s regulatory actions have greatly limited the ability for cryptocurrency exchanges to operate, leaving cryptocurrency holders to make trades on a peer-to-peer basis.

The publication reported that, with some of India’s cryptocurrency exchanges looking to relocate to countries like Switzerland, Malta, and Singapore, critics believe the RBI could have avoided the issue with a more measured approach to the cryptocurrency industry.

As the country’s financial regulator, these actions from FINMA arrive following the creation of a ‘fintech’ licensing category that will govern how cryptocurrency businesses operate.

“As a rule, all financial institutions are subject to similar due-diligence requirements relating to combating money laundering,” said a FINMA official. “However, as most fintech license applicants are likely to be smaller institutions, FINMA proposes to introduce some organizational relaxations for such institutions.”

‘Smaller institutions’ are those defined in the proposal with gross revenues under 1.5 million Swiss francs (around $2 million CAD at the time of writing). If the proposal is approved, these institutions will be relieved from some of the AML obligations that apply to the country’s banks, such as having to establish independent anti-money laundering units.

The University of Malta creates a blockchain technology scholarship fund

The University of Malta is partnering with the Malta Information Technology Agency (MITA) to launch a €300,000 (around $455,000 CAD) blockchain and distributed ledger technology scholarship fund.

The news arrives thanks to the Times of Malta, which reported that the new scholarship is targeted at students studying information and communications technology (ICT), law, finance, and engineering.

Beginning in the upcoming academic year, students will be able to apply for the scholarship for the purpose of completing their Master’s and PhD research dissertations in the fields of blockchain and distributed ledger technology.

The move follows a seemingly ongoing intent among policy makers and innovators in Malta to make the small European island a leader when it comes to blockchain technology. In June,  Maltese Parliament approved three bills surrounding blockchain technology in what the country’s ministers called a ‘world-first achievement.’