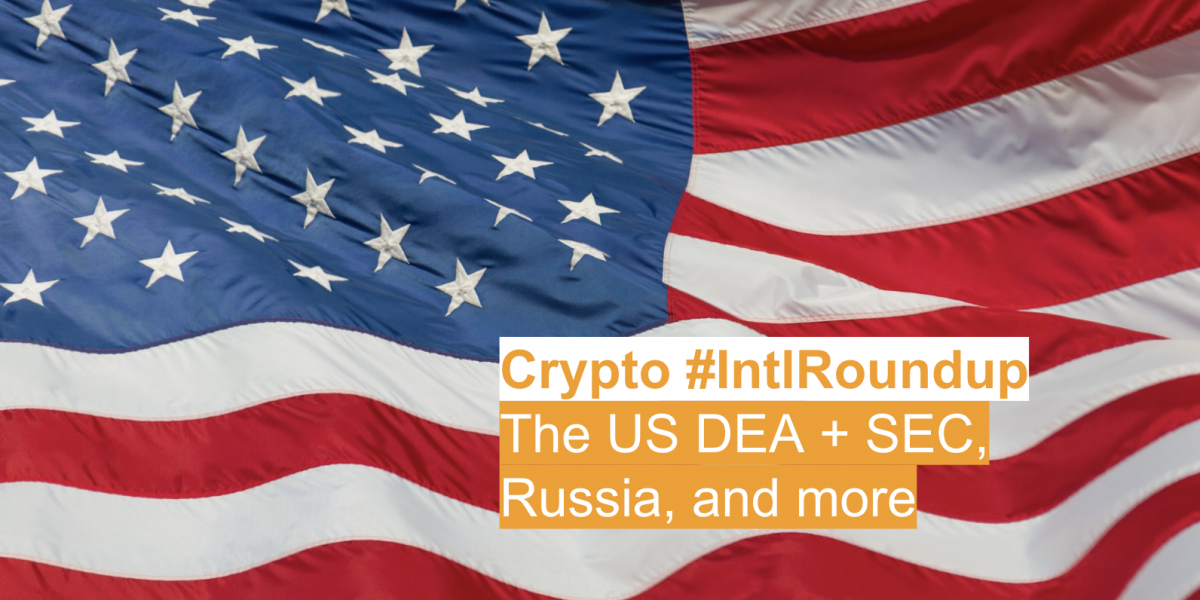 As part of a regular weekly roundup, Coinsquare News compiled the week’s significant international news headlines. In this edition, we look at survey findings on how Russians are engaging with cryptocurrencies, South Africa drafting new cryptocurrency tax laws, and more.

According to an August 7th report from Bloomberg, an authority from the U.S. Drug Enforcement Administration (DEA) said that Bitcoin is no longer a tool primarily used for illicit activity. This follows a recent a study which claimed that only 0.03% of Bitcoins in the U.S. and Canada are sourced from illicit activity.

Lilita Infante is a U.S. DEA special agent who is part of a 10-person Cyber Investigative Task Force which focuses on ‘dark web and virtual-currency related investigations.’ While Bitcoin has grown in popularity, she said that the majority of transactions are now done legally.

Infante added that the majority of transactions that occur in the current market are speculative, with only a minority being conducted for illicit reasons.

Interestingly, she added that blockchain technology can prove to be a helpful tool when it comes to tracing criminal activity, due to its function as a public ledger. She further joked that she wants criminals to use blockchain as it makes the DEA’s job easier.

Overall, her statements reflect a growing shift in public perception. While cryptocurrencies were seen negatively when they were first introduced to the public, increased education continues to prove that there are many legitimate uses for the technology.

This week, the U.S. Securities and Exchange Commission (SEC) delayed a highly-anticipated decision to approve or reject a bitcoin exchange-traded fund (ETF). As CNBC reported, the ETF proposal was put forward in a collaboration between VanEck and Solid X.

The proposal is one of many that aim to get the SEC to give the ‘greenlight’ to Bitcoin ETF’s – investments that track an asset or market index. While many are actively trying to get ETF’s approved in hopes of attracting large investors to the cryptocurrency market, none have succeed thus-far.

While the SEC is yet to reject this iteration of the proposal from VanEck, they have rejected two of the investment firm’s ETF proposals in the past. Currently, the SEC says that its decision will take place on September 30th, 2018.

According to a new survey from Romir, a private research company specializing in marketing and socio-economic studies, 44% of Russians are aware of cryptocurrencies.

The survey (note: link is in Russian) purportedly polled 1,500 Russians in an attempt to quantify how the country’s population is reacting to the rise of the cryptocurrency industry. Of those surveyed, only 13% claimed to have a ‘good’ understanding of the industry.

This is especially interesting for a country where the government previously expressed an intent to launch a cryptocurrency of its own.

Comparing these findings to a recent Bank of Canada publication provides some insight into how Canada’s level of cryptocurrency education compares to other parts of the world. Making use of a survey conducted in December 2017, the Bank of Canada estimated that 85% of Canadians had heard of Bitcoin.

Bitcoin and other cryptocurrencies would officially be considered intangible assets for tax purposes as per the new draft, and subject to income tax. By law, residents would then have to declare income earned from cryptocurrency transactions in order to stay within the new tax guidelines.

This is consistent with the revenue service’s previous statements in April 2018, when it said that cryptocurrencies are not regarded as a ‘currency’ for tax purposes, and are instead considered ‘intangible assets.’

Purportedly, the proposed changes would also mean that Value-Added Tax (VAT) would not apply to cryptocurrency transactions, as the country’s tax authorities view them as ‘exempt financial services.’