How Blockchain Can Empower Women 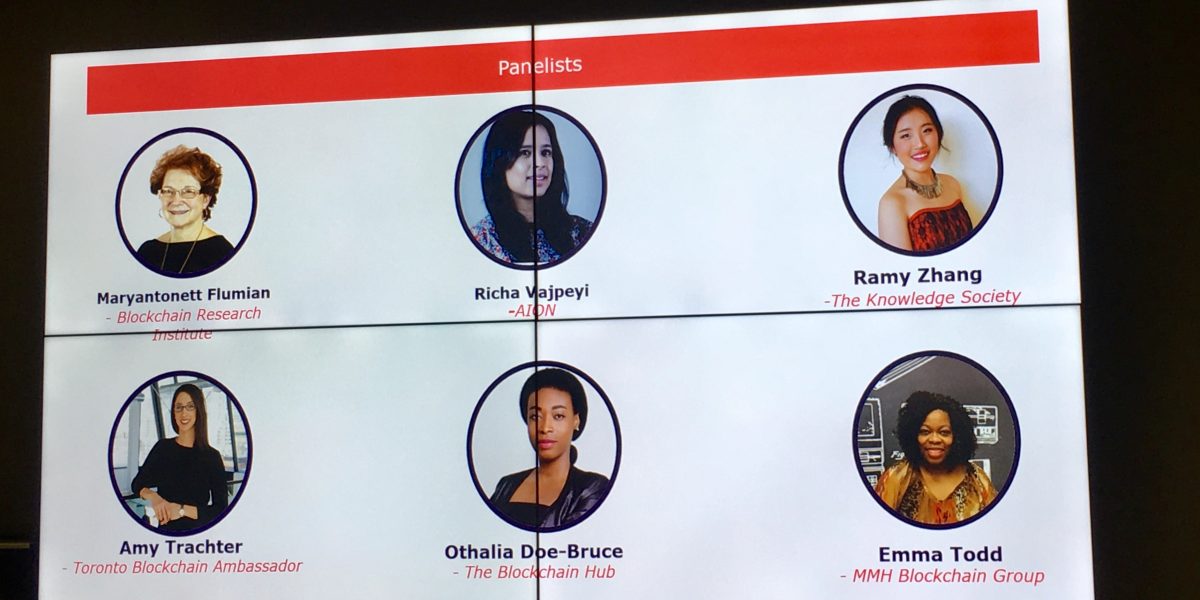 As with the broader tech industry, blockchain is a predominantly male industry. However, blockchain sits in a unique place compared to other technologies – all information is available online, breaking down barriers to entry for all.

An engaging panel of empowering women and a strong focus on community was what brought this event together at 200 University Avenue in Toronto.

A new take on “potential” for Blockchain

Zamkow discussed the potential of Blockchain but in an entirely different manner. What resulted was a very important discussion around bringing more opportunities to women in blockchain.

As it stands, ratio of men to women in STEM industries is heavily skewed to men. In the Blockchain industry, this gender gap is even more obvious; only 5.27% of Bitcoin community engagement coming from women, according to Coin Dance.

The community is heavily underrated

In terms of growing a community and what the industry held for newcomers and veterans alike, Vajpeyi commented that Blockchain held “potential for the whole globe to take part in.”

“A blockchain can be applied to many areas and industries,” added Doe-Bruce. “Anybody can find something for themselves.”

“Everyone thinks that Blockchain is about making money,” said Todd. “The community is one thing nobody talks about.”

Trachter echoed this sentiment, adding that she actively focuses on “growing the blockchain community in Toronto.”

Given the open source nature of the blockchain world, though, Ramy Zhang commented on the fact that gender parity didn’t need to exist.

“Women are intimidated even though women and men all have access to the same resources,” she said.

Todd, however, believed that Toronto had a healthy and growing community of women in Blockchain. “When I need a female speaker in Toronto, more than likely I can find one without any trouble,” she said.

“What I want is for women to learn to speak up when they don’t like something,” she added.

Education is king, but so is environment

Women still face barriers to their professional advancement – and this extends into the Blockchain space as well.

“I think there are two ways of seeing this problem,” said Doe-Bruce. “One struggle is internal. We don’t think we can be good enough.” But there was also a second problem where women didn’t always have the right environment to flourish.

“I told my male colleagues: ‘include me in your meetings in technology because I have the education and know-how to assist,’” added Doe-Bruce.

“But if you do want to sit in the room with the technical people, make sure you know your stuff,” she said. “Take time to educate yourself.”

A most public example of such an environmental difficulty was also raised that evening. The panelists openly discussed the scandalous “networking party” held at a Miami strip club after the North American Bitcoin Conference, earlier this year.

Blockchain could change your life

Doe-Bruce congratulated all the women in the room for their proactivity in attending the event. “Every single woman that came today has taken a step towards getting into the Blockchain industry,” she said.

A very “lean-in”esque evening, panelists encouraged all attendees to find their calling to the industry by seeking out mentors, researching whitepapers and finding sources to update their knowledge.

“My advice would be to get a wallet and buy some cryptocurrency,” Vajpeyi said. “Experiment with a small sum of money and watch it over a period of time. That’s the best way to learn and that’s how I got interested in the space.”

Panelists unanimously agreed that it was a great time to be entering Blockchain.

“You’re interested in something that can change your life,” concluded Trachter, to applause and cheers.