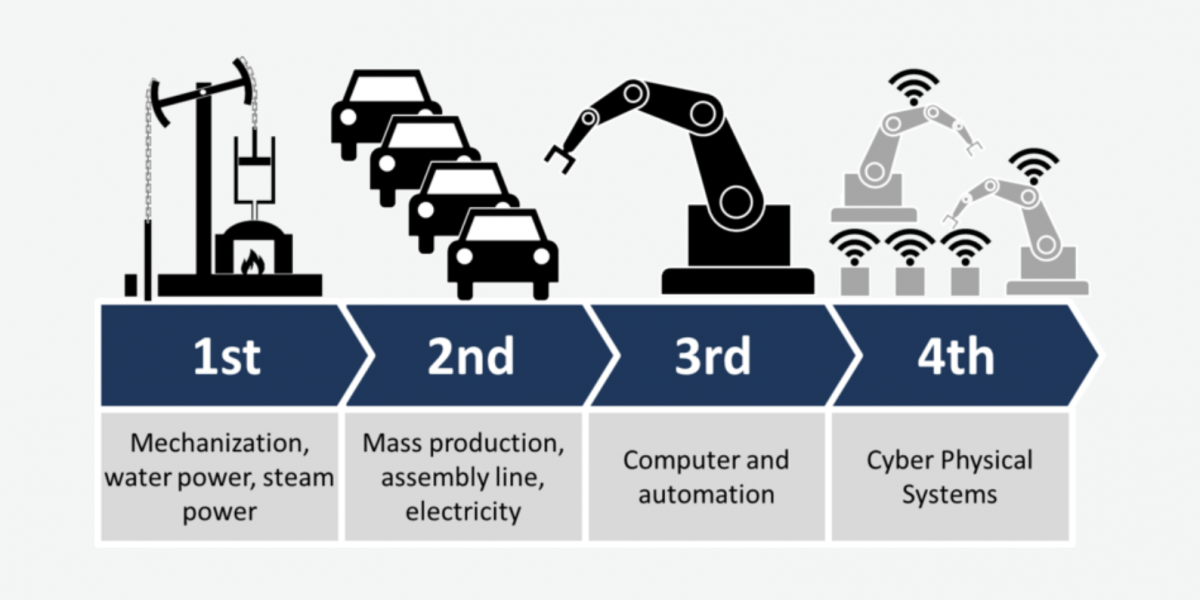 The term “fourth industrial revolution” was first used by the World Economic Forum (WEF) in 2016. It represents a new era of technology and industry in our global society characterized by a handful of new technologies: blockchain, the internet of things (IoT), artificial intelligence (AI), and machine learning (ML).

Our society’s first industrial revolution began in the 18th century with water and steam power, the 20th century saw both the second, with electricity, and the beginning of third, the internet, which has carried us through the past few decades of technological and digital progression.

Though some believe we are still on the cusp of the fourth industrial revolution, the WEF’s work in this area indicates we have more likely already transitioned to this new phase of industry, economy, and society.

The IoT names a progression of our devices and machines to being fully connected to the internet and to each other. Right now we are connecting phones, computers, music systems, and home technology like alarms and light bulbs.

All this technology can now communicate with each and every other compatible device, sending instructions and activity data back and forth.

In industry and society, IoT could theoretically use sensors and the internet to blend digital technology with physical machinery. Anything from machinery to animals wearing electronic sensors will deliver real time information to computers and their operators, helping to make better decisions – and even have technology make some decisions for us.

In the domain of artificial intelligence and machine learning, computers, software, devices, and robots are being taught by humans how to think for themselves. Programming and algorithms loaded with data from numerous real world experiences teach computers how to respond to certain scenarios and make their own choices and actions.

The goal is that AI enabled software, computers and robots will collate incoming information and make decisions on things like emotion and intuition, originally only the domain of humans.

As well as being a growing hub for blockchain technology, Canada is a thriving home for AI research and development. Canadian AI startups have raised millions to develop AI algorithms and programs.  These innovations cover everything from intelligent retail management from Rubikloud, and sales systems from Maropost, to AI enabled cybersecurity systems. The latter, from an Ottawa-based startup which raised $24 million CAD, can analyze and make decisions about masses of data to quickly highlight cybersecurity risks and dismiss false alarms.

An electronic, computer-based, shared, distributed ledger – blockchain is a new way of storing and sharing data and transactions more securely and immutably than ever before. Blockchain uses cryptographic hashing to encrypt data to provide more security than existing computer programming and systems.

Encrypted with this data is time and date information that cannot be changed, resulting in records that cannot be disputed. Blockchain technology is being investigated in every industry but primarily in finance, logistics, trade, healthcare, and government records, all seeking to take advantage of proven data that can be quickly accessed by all stakeholders.

The decentralized nature of blockchain technology, where data is stored on participating nodes, or computers, across the blockchain network, rather than in corporate owned central computers or data farms, is also making blockchain very attractive.

Decentralization moves the power over data away from governments and larger organizations, it makes data safer from hackers or environmental factors as data is stored in many places. A decentralized network also makes it much faster for participating nodes, or computers, and those using a blockchain network to access the information they need.

The ‘trinity’ of transformational technologies working together

Blockchain, IoT and AI are perfectly pitched to work together. Integration and interoperability of these technologies is fast becoming a priority for developers.

Across all aspects of our lives, the three technologies and more will eventually work together fluidly.

For example, IoT will generate data about everything happening around us. AI could make a decision on new information provided by IoT in the absence of a human to give instruction. Underlying all of this, blockchain networks could be carrying and securing this information, delivering to humans and control centres for more informed decision making.

Vacation during the Fourth Industrial Revolution

That device could then make a decision to turn the heat on in your home until while the temperature is down. Blockchain technology would record all this and carry a notification on your mobile device that tells you what has happened so you don’t come home to any surprises.

You have no action to take, you know exactly what is happening, and can carry on your vacation in peace. If you didn’t want those actions to be taken, you could also command the technology to not take any action – all remotely from your phone.

This ‘trinity’ of technologies will be important to both consumers and industry. “Industry 4.0” is this title for this iteration, as in “fourth industry.” The age of automation and digitization that comes with the fourth industrial revolution will change almost every industry.

CB Insights visualizes a factory of the future where products are built with industrial augmented reality and robots, IoT sensors monitor all of the process, and blockchain technology manages resource planning, supply chains and logistics. 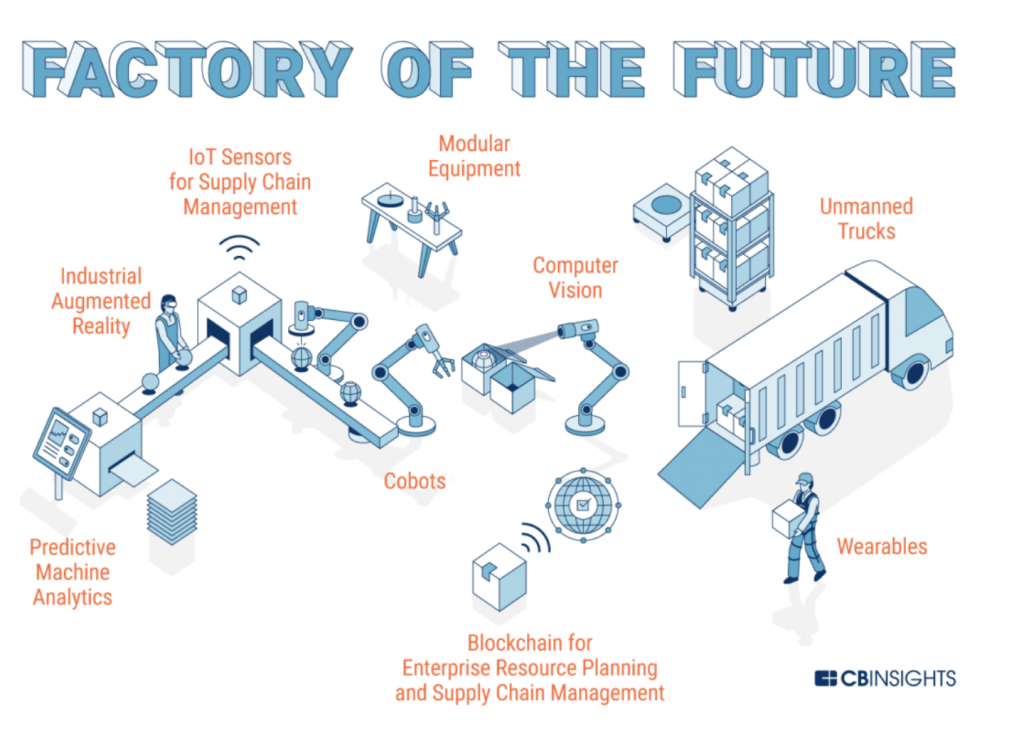 In one of the most advanced factories in the world Changying Precision Technology Company, China, makes phone parts. The factory is already completely unmanned and operated by computer-controlled robots, monitored by staff in a central control system. The factory once employed 650 workers and now has 60, the robots work in the dark, with no heat or air conditioning, they don’t need it.

Factories like these, as well as many other aspects of industry, will soon be able to once again upgrade the technology they use, adding today’s new transformational technologies.

Now, the fourth industrial revolution is one of blockchain, IoT and AI, combined with machine learning, virtual reality, and even digital cash, and it’s here.