Blockchain for Social Impact Event Welcomed All to Blockchain 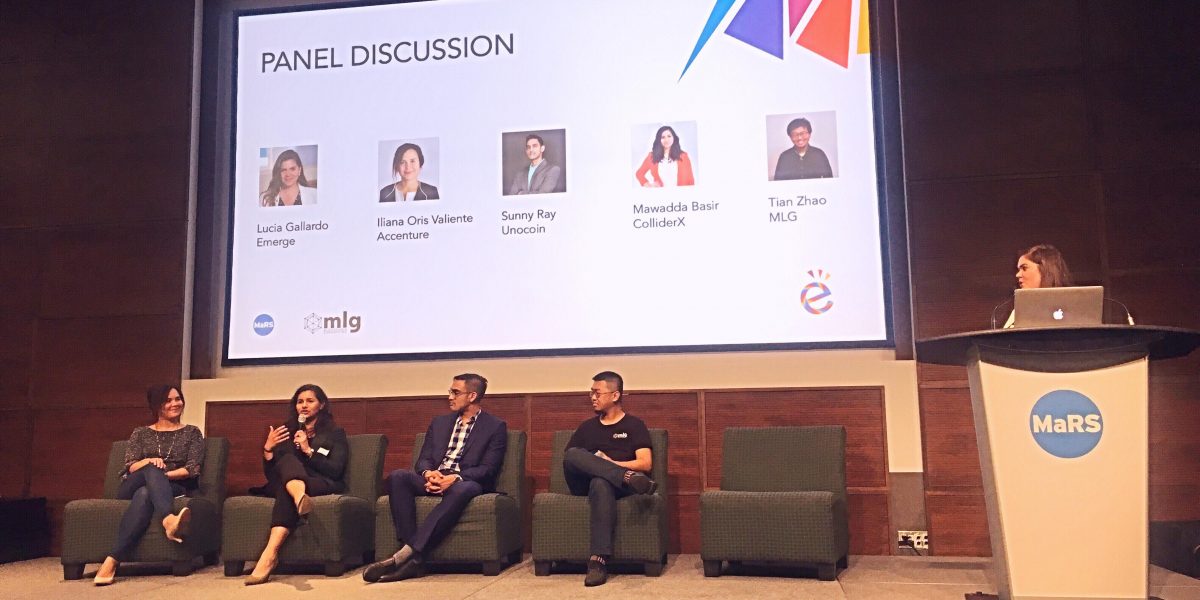 Compassion, gratitude and caring were personified at the Blockchain for Social Impact event held at the MaRS Discovery District in Toronto on Thursday, May 31st, 2018.

To a mixed audience of newcomers and good Samaritans, organizer Lucia Gallardo shared the benefits that blockchain was creating for underprivileged communities. The panelists discussed the possibilities that blockchain holds for the enhancement of human lives in war-torn and impoverished nations.

Making the event a reality

Lucia Gallardo is the founder of Emerge and was also the lead organizer for the event. In honest and heartwarming remarks, Gallardo confessed to the heavy-lifting that had led to making this event a reality. Having spent an entire year in the planning, she couldn’t help but express how excited she was to be hosting this event on such a unique blockchain topic.

Not to mention, her enthusiasm in sharing the stage with her fellow panelists, and industry leaders, Iliana Oris Valiente of Accenture (first from left in image); Mawadda Basir of ColliderX (second); and Sunny Ray of Unocoin (third). Tian Zhao of MLG Blockchain Consulting (fourth), a new speaker to the big stage, also joined the experienced panel.

Quite unlike typical blockchain events, this event attracted a lot of new faces and skewed female.

Gallardo, who hails from Honduras, is no stranger to the need for humanitarian projects. According to the Emerge website, the organization runs several projects that “fuel the leapfrog development effect in places where capital and other resources have been historically trapped by mismanagement, inefficiencies, and other obstacles.”

Blockchain can impact health and finance in communities globally

Blockchain technology is having a huge impact in third-world countries. There now exist refugee camps that leverage the intersection of biometrics and blockchains to distribute benefits to camp residents. And as far as decentralization and cryptocurrencies are concerned, they bring empowerment to the individual. This is an element that is palpably lacking in countries with corrupt governments and almost worthless currencies.

“The Bitcoin system is robust and can’t be shut down. In addition, it is far more accessible [to the underbanked],” said Ray. “My dad sends money back to India [using Bitcoin] because Bitcoin circumvents the challenge of crazy remittance fees.”

But financial applications aren’t the only place where the underprivileged benefit. Food contamination and sickness run rampant in bare-minimum to no-healthcare zones. As such, Blockchain has created new opportunities to trace the origins of food right to their endpoint, to catch illness before it reaches epidemic proportions. This can be exacted right from micro-communities to across continents.

And when one thinks of healthcare in these regions, it is of the utmost importance for governments to have a way to track patient health records.

“Blockchain for good requires stakeholder management and collaboration,” she added.

But there’s also the question of energy and how decisions are being made to use limited resources to power communities.

“Blockchain doesn’t create energy but we can manage the infrastructure in which it is distributed,” said Gallardo. “Renewable fields present an opportunity to be peer-to-peer traded and would create secondary income for [members of these communities].”

“It’s our duty to think about the social problem and how decentralization can solve it.” – Lucia Gallardo

When discussing criminal activities, “Bitcoin does create existential problems,” admitted Ray. “However, that’s where KYC and AML procedures become important”. He added that Unocoin now services millions and while he does witness a percentage of criminal activity, it’s not overwhelming.

“We would collaborate with law enforcement to abide by the law [to report nefarious activity]. Just because the technology can be used by bad guys doesn’t make it bad,” he said.

Blockchain for social impact requires a lens of fairness

Disruption is a buzzword being thrown around, almost without discretion, but it truly holds the strongest meaning in the case of under-resourced communities.

Blockchain has made it possible to disempower corrupt governments, return fairness to judiciary and make access to money easier for the individual.